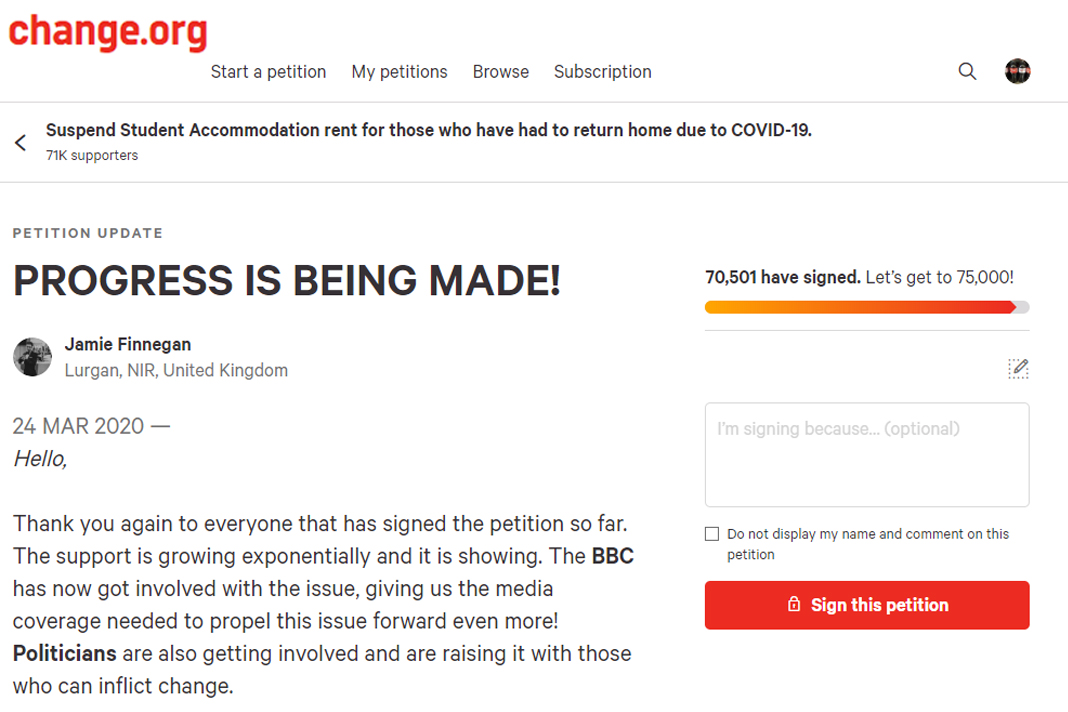 Started by a student in Belfast who claims it is unfair to charge tenants rent when campus studying has been suspended, the petition has garnered increasing support after the BBC and Guardian newspaper gave it coverage.

An online petition calling for students to be let off paying rent this term has been signed by more than 70,000 people.

With universities closing their doors, it asks all landlords to suspend rent payments for students who have had to return home.

Queens University student Jamie Finnegan in Belfast started the change.org petition and believes it’s unfair for students to pay hundreds of pounds a month for a room they’re not using, when most already face other bills every month.

“With hundreds of people being told not to come back to work due to the pandemic, students are going to be left financially unstable and unable to pay for their rent, regardless if they are living there or not,” he says.

Finnegan believes that student accommodation providers should realise that their cancellation policies don’t cover scenarios such as the unforeseen pandemic.

He adds: “It’s categorically unfair and greedy to charge students for rent if they are unable to live in their accommodation.”

While some large student accommodation companies and university-run halls of residence are now giving students the option to terminate their contracts early without financial penalty, small private landlords are now being pressured to follow suit.

The National Union of Students has demanded that every landlord should offer students a no-penalty early release from tenancy contracts for the current and next academic year.

It wants an end to all evictions during the crisis, with rent subsidies, reductions or waivers for six months for those impacted by Coronavirus, and no rent increases for the next 12 months.

Around the country, hundreds of university students have also signed up to a rent strike, including those renting off-campus at the University of Warwick.