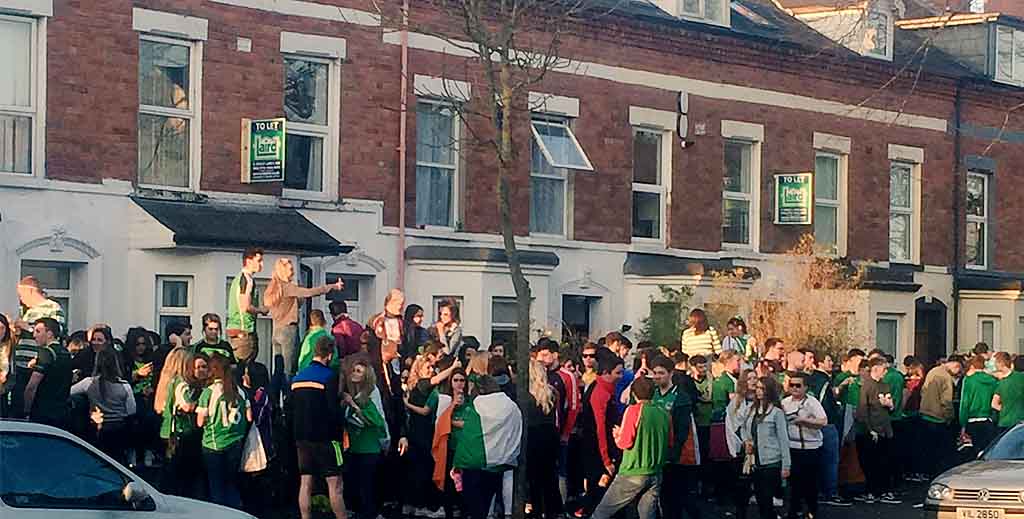 A leading Northern Ireland landlord has caused a storm after suggesting that families who live in student areas should leave if they don’t like the partying antics of their undergraduate neighbours.

Speaking on BBC Radio Ulster’s breakfast programme Robert Greer, Chair of the Landlords Association of Northern Ireland, told the station’s presenters that “young students and middle-aged people do not mix”.

Referring to the popular student area of Holyland in Belfast, he went on to say that “the handful of families who live in this area must be tolerant of student culture” but that “most of us faced with that would move somewhere else and we don’t understand why they don’t do that”.

This suggestion that non-students should consider leaving areas like Holyland (pictured, above) where university undergraduates accommodation is concentrated has caused a storm following the programme’s broadcast yesterday morning.

South Belfast MP Claire Hannah told local media that: “These comments betray a terrible attitude toward efforts to regenerate and build community cohesion in the Holyland.

“Residents have had to fight this dismissive thwarting attitude for years. The Holyland area is a mix of families, young professionals, students, asylum seekers, and new communities; it is not solely a ‘student village’.

“Many of these residents have lived here for decades and live there all year round. The suggestion that long-term residents should simply leave is offensive and deeply unhelpful.

“The Holyland area has faced challenges year on year and this has been compounded both by the dismissive attitude of landlords and by the acute issues relating to the pandemic.”

Greer told the programme that his organisation didn’t like the problems caused by students in Holyland but that low rents, which are half that of the PBSA blocks in the centre of Belfast, meant places like Holyland would always have large student populations.