Home News Stop hitting landlords over the head with a stick, industry leaders... 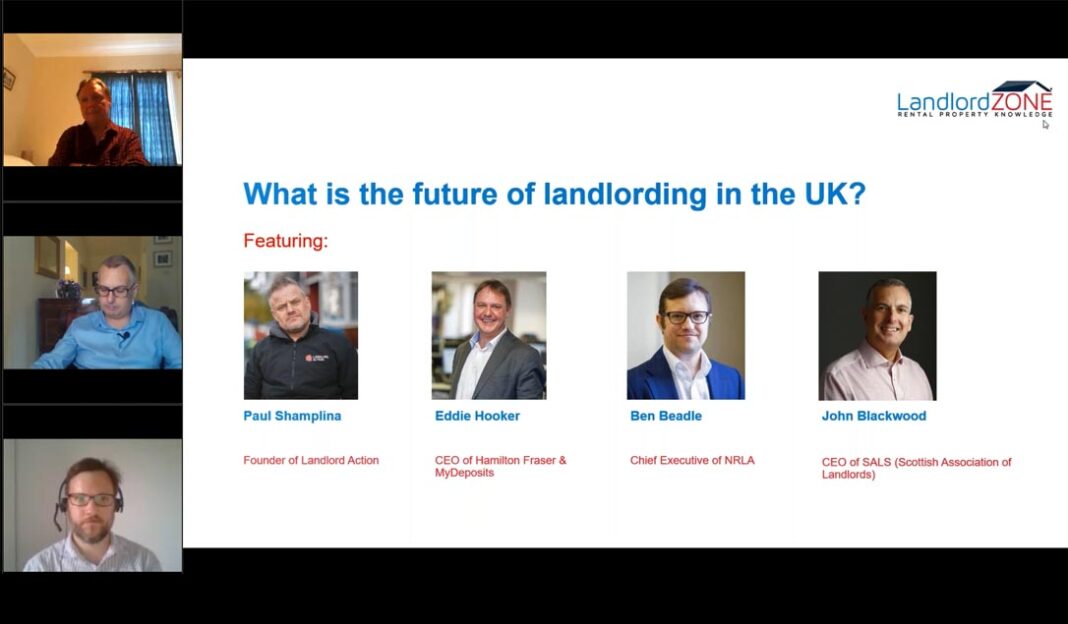 Four of the private rental market’s key figures have taken the government to task over its ‘landlord bashing’.

Ben Beadle of the NRLA, John Blackwood of the Scottish Association of Landlords, Eddie Hooker of MyDeposits and Paul Shamplina of Landlord Action debated the ‘future of landlording’ during which a range of high profile topics were discussed.

Several clear messages were delivered, including how extra regulation is frightening new landlords away and forcing many larger portfolio landlords to quit the sector.

Key to this problem has been the Section 24 tax changes, tenant fees ban, selective licensing, the proposed changes to Section 21 notices and now the evictions ban.

All agreed that government policy is baffling. Private landlords have been forced to take up the slack from the affordable and council home sectors, a role they are often ill-equipped to provide, but at the same time disincentived to invest.

“The constant attack on landlords really annoys me because the government doesn’t seem to have thought about where else are the tenants are going to live,” said Hooker.

Beadle added: “It’s creating a market bubble too, forcing up rents in many areas and going against their aim of making renting more affordable.”

Blackwood said the lack of affordable social housing remains the key problem, and that if government invested in that properly, it would take the pressure off the private rented sector.

“A lot of landlords are telling me the sector isn’t worth it any longer – so if more landlords quit, what will happen? People need somewhere to live,” he says.

“Instead of hitting us over the heads with a stick, they should be encouraging us to invest more.”

The group agreed that Covid has intensified these problems and that the ongoing eviction ban is a product of the government’s lack of investment in affordable and council housing.

These sectors are unable to take up the slack during Covid, and so an evictions ban is the only path left open to ministers.

“The worst is still to come,” says Beadle. “Landlords are now expected to pay the debts of others and suck up not being able to take possession of their property – after years of filing in for government. We can’t carry the can for ever.”

Blackwood added: “Landlords cannot expect to have tenants in their properties for over a year without paying a penny in rent.

“If the government doesn’t want anyone to be evicted then they should pay everyone’s rent – it’s a simple as that.”

Watch the full webinar for free.