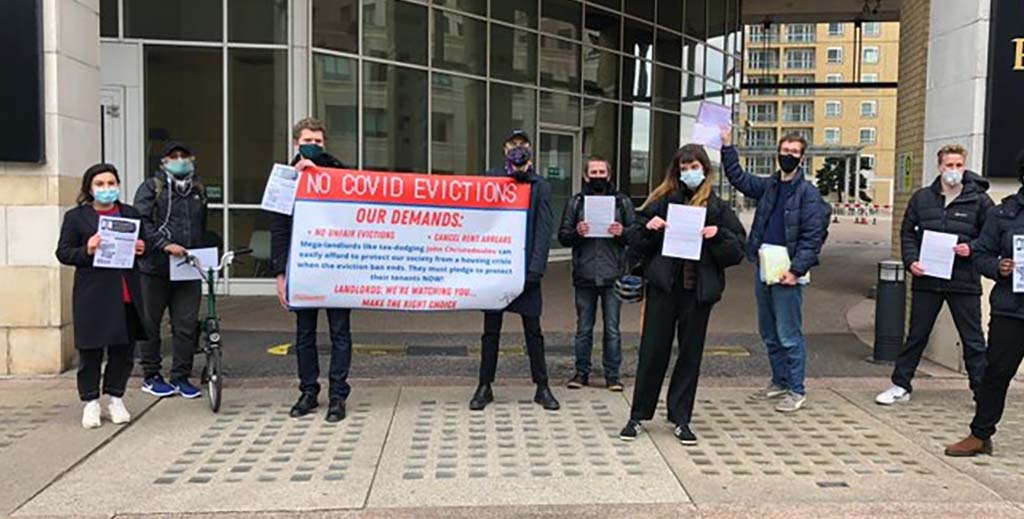 Housing activists hope to mobilise an army of volunteers around the country, ready to fight evictions after the ban ends on 31st May.

Momentum kicked off its campaign with a day of action at the weekend when protestors picketed landlords and agents’ offices demanding they commit to not evicting tenants during the pandemic.

As part of Momentum’s Eviction Resistance campaign, action groups in Southend, London, Loughborough, Bradford and Shipley held socially distanced protests against what they labelled a “rigged housing system” and have vowed not to stop until their demands are met.

The protests came after Momentum activists wrote to major landlords in their areas, requesting they sign up to the pledge.

Housing companies such as Uncle Living and billionaire property-owner John Christodoulou “refused or failed to reply” according to activists.

Momentum’s new housing campaign is working to build a social movement to extend the eviction ban in England and Wales until September 2021, legislate to force landlords to forgive all rent arrears accumulated during the pandemic – with means tested financial support to compensate small landlords where necessary – and an end to Section 21 evictions.

Jennifer Forbes, a member of its national coordinating group, told Tribune: “We’ve got a couple of weeks before the ban lifts to build an army of organisers across the country.

It’s the tireless work of people on the ground which will make the difference between success and failure. By knocking on doors, by getting rooted in your community, by mobilising your friends and family, by running your local campaign, you can help turn the tide.”

She added: “To stop evictions we need organisers spread across all parts of England and Wales, ready to mobilise when the ban is lifted.”

Read more about the most recent evictions ban.