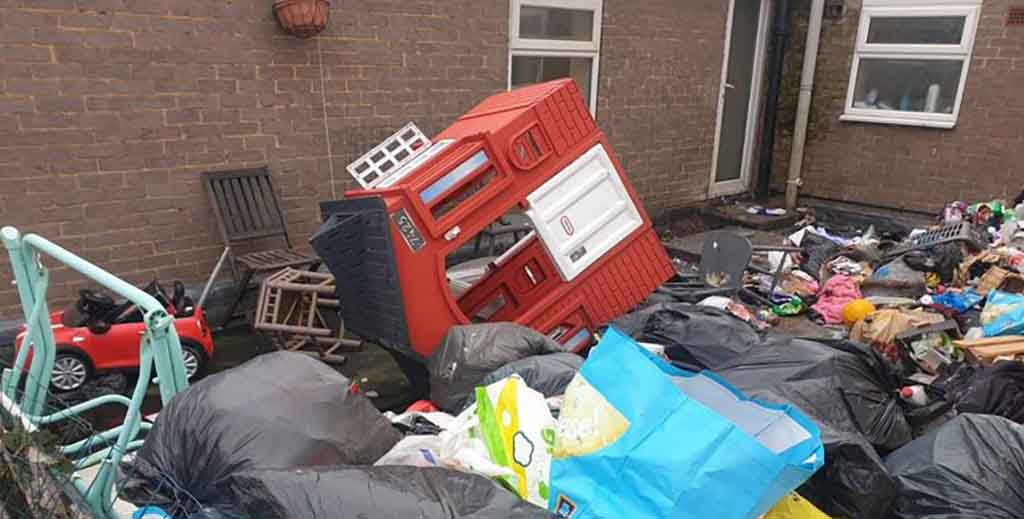 A landlord couple are at their wits’ end trying to evict nightmare tenants whose habits are so bad that their furniture shop underneath the flat faces regular damage.

Zoey and John Wingfield from Grimsby served the family with an eviction order after rent arrears had built up for four months, but it was thrown out after the judge told them they must give six months’ notice. They’re now trying to appeal the decision but while they wait, both receive abuse from the family and John was assaulted. They believe the stress led to him ending up in hospital after a heart attack.

The flat has been wrecked during the last year, with mountains of rubbish strewn across the flat roof at the back of the property.

Blocked drains in the bathroom have caused water to leak down into their furniture shop; according to John and Zoey, the nightmare tenants clogged up the toilet with nappies and blocked up the bath with cigarette ends.

The couple have spent tens of thousands of pounds trying to keep on top of all the damage being done to their business and the other flats they own in the building – three of them are now empty after tenants were driven out.

Zoey tells LandlordZONE: “They’ve blown our electrics and the water damage has ruined some of our stock a few times. We really don’t know what else we can do but watch them destroy our livelihoods.”

She adds that they’re now worried the poor state of the cooker and blocked fire exits are a real fire risk.

“They’ve changed the locks recently and won’t let us in to check the gas,” adds Zoey. “We’re just desperate now and it feels like we’ve got to start all over again with the courts. It’s just not fair.”