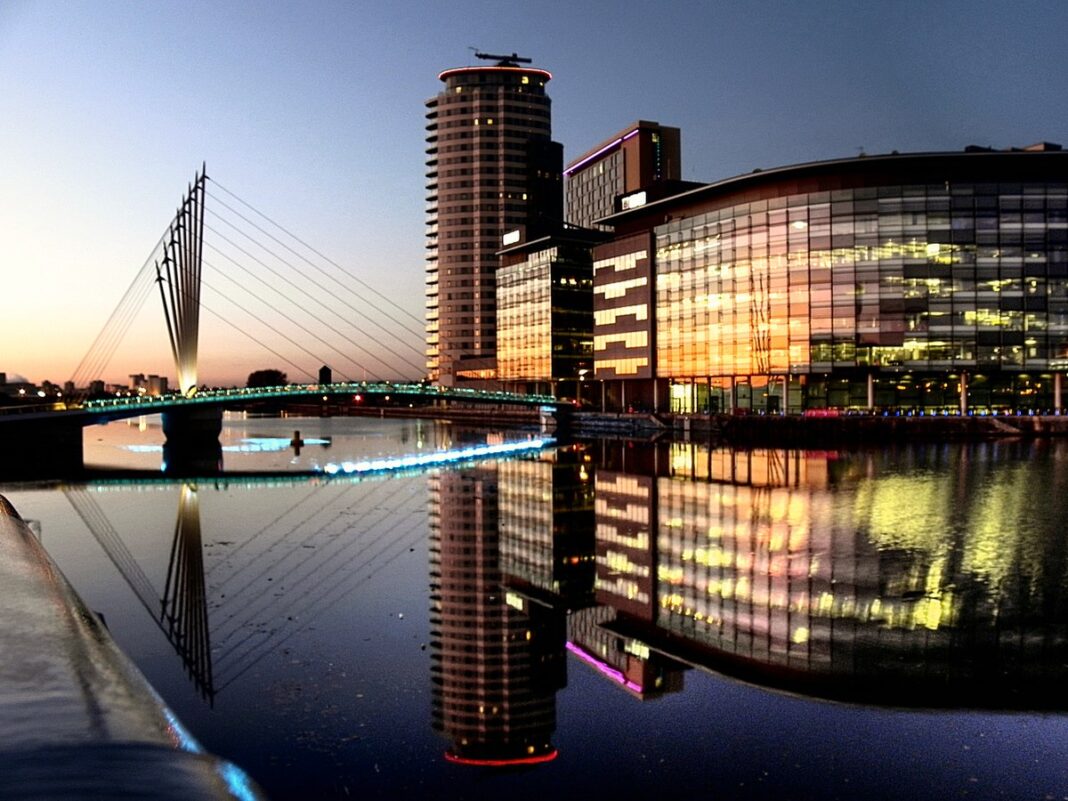 London based LandSec has until now concentrated on its central London offices and shopping centres, including the Bluewater and Trinity in Leeds, with a total property portfolio valued at around £11billion.

CEO of LandSec Mark Allan told the Manchester Evening News that the purchase of Media City was an “incredibly scarce” opportunity bringing the world’s super-rich to Greater Manchester. Manchester, he said “…is very much on the radar”.

Media City is not LandSec’s only target, in a separate move the firm has bought U+I, the developer behind the Mayfield regeneration project around Manchester’s Piccadilly station, the termination point of HS2. It’s a project that will create the first city centre green space park for 100 years.

The brownfield developer U+I is Land Securities’ first major acquisition in 20 years after striking the £190 million deal as part of its diversification strategy into urban regeneration.

Work has already started on the large Manchester Mayfield Piccadilly scheme, where it will ultimately provide 2m sq ft of office, retail and leisure space and 1,500 new homes set around the 6.5 acre public park.

It is now ten years since the first phase of MediaCityUK was completed, what was a huge 200-acre wasteland that was once Manchester’s docks at the end of the Victorian built Manchester Ship Canal. Over that time the docks were transformed into a tech and media hub, with glass towered high rise apartments, offices and hotels.

The BBC was moved in as the anchor tenant along with the Lowry Theatre and shopping centre. ITV soon followed, along with the University of Salford, the whole complex now accounting for around 7,000 workers.

Originally developed by Peel Holdings and Legal&General, MediaCity, says LandSec, will move to a new era after the £425million deal by Britain’s biggest commercial property company. LandSec will own a 75 per cent stake while Peel L&P, and Legal&General will retain the other 25pc and will continue as asset manager.

CEO Mark Allan only joined LandSec 18 months ago and has undertaken a “full review” of the business and its strategy, following which he has taken the decision that the firm needed to take on new opportunities for growth.

Allan believes growth opportunities in the real estate industry right now are most likely to come from what the industry calls “mixed use development”.

“And I think the pandemic only increased the focus on that, with people wanting to be able to live, work, shop, play within the close vicinity of where they are, rather than having to do lots of travelling on public transport.

“So we wanted to invest in big mixed use projects. A mixture of residential, offices, retail, leisure etc.

“And we wanted to do it quite quickly. So we started looking about a year ago and two of the most exciting projects, and the most progressive projects, were in Manchester, in MediaCity and Mayfield.

“They’re both fantastic projects, MediaCity much more progressed, you’ll know better than I do just how fantastic that has been for Salford for the waterfront area around there, you’ve now got the BBC, ITV around there, Salford Uni, huge studios, a big tech and media hub on what was effectively redundant brownfield land 15 years ago.

“The chance to get involved with something like that, and with another phase of development to come, a mixture of offices and residential, was really exciting.

“And Mayfield is 30 acres, next to a massive railway station in the centre of one of the largest, and certainly the fastest growing, regional economy in the UK.

“Opportunities like both of these are incredibly scarce, so hence why we’re so excited to have the opportunity to come in, alongside the existing partners in all cases, and hopefully add something, including hopefully, some of our capital, our cash.”

MediaCity has outline planning consent that could essentially double its size in the future. LandSec intends to invest to build more office space targeted at the fast growing tech and media sector, and quickly.

“It [MediaCiry] has such a great reputation as an ecosystem that’s built up around the studios, the BBC, ITV etc, 250 small and fast-growing businesses in the tech and media space,” Allan says.

“But there isn’t really any office space left for them to occupy in MediaCity because it’s effectively full.

“So building some more offices is probably the first step and that could happen as early as 2023, in terms of starting on site.”

Looking into the future Allan thinks LandSec will be guided by what Peel and local residents say they want, whether that be apartment blocks or leisure and retail facilities.

Manchester is growing at 3.8pc, compared to London’s 2.3, that’s why LandSec sees Manchester as a fantastic growth opportunity along with the other significant investors that have bought up assets in the city and region in recent years.

Another of Peel’s mega projects, the Trafford Centre, was recently acquired by Canadian pension fund CPPIB while earlier this year, Miami-based Starwood Capital Group bought the Renaissance hotel site on Deansgate in a joint venture with Property Alliance Group.

Mr Allan told MEN that international capital now sees Manchester as “one of the ‘hottest tickets in town.’ If you look at the economic growth that Manchester saw in the five years up to the pandemic, Manchester was the strongest growing economy in the country, by quite a way,” he says.

“What we like about Manchester is it had that momentum coming into the pandemic, it seems to be recovering it really strongly as we come out of the pandemic, and success stories have a habit of really building momentum and keeping going for a long time.”

A term used by some – north-shoring – to describe the growing trend for businesses to move away from the Capital and the south east to northern cities, not just to cut costs but to tap into employment and other valuable resources, appears to have been playing out here.

There is a question as to whether this trend will now accelerate post-pandemic, when offices are likely to become somewhat less essential, but Mr Allan says he doesn’t think that Manchester’s growth will be reliant on businesses moving in from elsewhere:

“The UK in a global context is quite an unusual country, from an investment point of view anyway,” he says.

“It’s historically been very London-centric, and so there’s been a lot of investors going in and buying offices, shopping centres and residential towers and things in London.

“But we’ve definitely noticed that over the past five plus years Manchester is also very much on the radar for that international capital in a way that I think very few other regional cities at the moment are.

“So Manchester to me seems to have that more than elsewhere.

“Then you look at the economic growth story, it’s a very compelling one.

“After London, Manchester is the largest economy, largest office market, largest build to rent residential market, has the most liquidity in terms of property investment each year, so I think for us it ticks all the boxes in a way other cities don’t quite.

“If I look at office utilisation at the moment, the number of people back in offices, generally speaking that’s higher in the regions than it is in London.

“I think one of the reasons for that is there’s probably less reliance on public transport, more people driving, perhaps more affordable accommodation in relative terms close to where people are working.

“I think there are some of those factors that add appeal.

“I’m sure North-shoring is a thing, but to me the economic growth in Manchester is being generated in Manchester and not by jobs moving from elsewhere.

“It’s got its own centre of gravity. I don’t think it’s reliant on drawing people in, or jobs in from other cities, I think it’s creating its own jobs.”

According to the Manchester Evening News, there are more people back in the office in the regions than London. Not only has Greater Manchester shown stronger economic growth than anywhere else in the country, investors clearly think it’s set to continue.

At just one planning committee meeting in 2020, Manchester City Council signed off over £1billion of new investment, plans which include new skyscrapers, student accommodation, offices and a second of the city’s large entertainment arenas, next to the Etihad stadium in east Manchester.

Mr Allan attributes much of Manchester’s success in attracting new inward investment and growth to the City Council’s reputation for a long time as being “pretty progressive” in terms of how its sought to unlock development.

The Universities – Manchester is home to the biggest university campus in Europe – Mr Allan sees as a key element in the region’s success, along with its high graduate (60 per cent) retention rate, finding employment for this key resource after studies are finished.

The City’s two world famous football clubs, with their huge global followings, also have a bearing on how people see the city thinks Mr Allan. Building a strong brand and giving the likes of LandSec and others the confidence to invest for the future is the result.