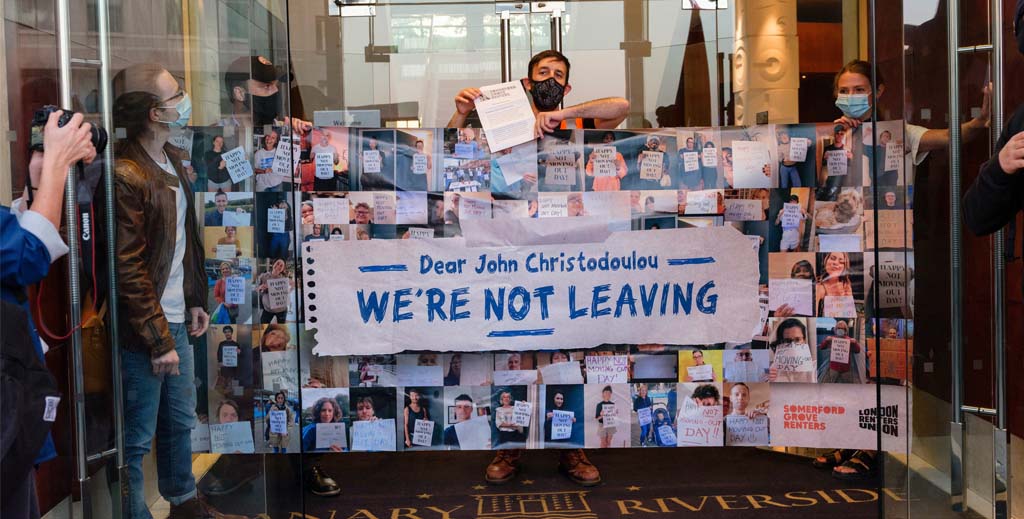 A group of campaigning tenants are celebrating an eviction reprieve from their billionaire landlord.

The renters, who live in Olympic House, a block of 170 flats mainly owned by property developer John Christodoulou in Somerford Grove, Stoke Newington, tried unsuccessfully to negotiate for a temporary 20% rent reduction during the first lockdown.

The group’s organisers’ tenancies then appeared to be singled out for eviction, with notices citing the reason as a ‘business decision’ which prompted a raft of protests.

However, their notice of eviction has now been rescinded, while Hackney Council has confirmed that the block is now under investigation for unlicensed HMOs.

It says “ongoing and complex investigations” are taking place into multiple properties in the block.

Hackney Mayor Philip Glanville backed the tenants’ campaign and says: “Let’s hope that this is the start of something far broader from the landlord and their agents, and only one potential victory in a much bigger struggle for renters’ rights across Hackney and London.”

Councillor Sem Moema, Hackney’s mayoral adviser for private renting, adds: “This is a huge win for Somerford Grove renters…that this revenge eviction has been stopped.”

Somerford Grove resident Jordan Osserman told The Hackney Citizen it was good news but suspects the landlord may be getting things in order, ready to issue a valid eviction notice.

He said: “If the landlord and letting agent had agreed to meet face to face I’m sure we would have been able to reach an amicable agreement. It wouldn’t have gone this far. But they chose to behave this way, so we’ve done everything we can under the law to defend ourselves.”