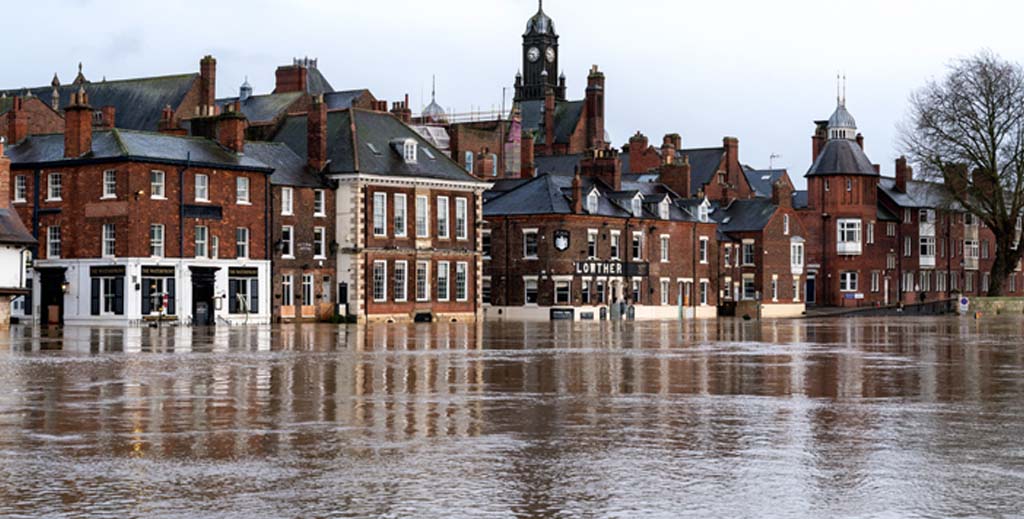 Climate risk adds a new dimension to growing commercial risk when it comes to flooding of commercial premises. More heavy summer downpours with flash floods are putting business operations at risk across the UK, with all the disruption that entails. These long-tail risks occurring in random locations are hard to predict, leaving many commercial operations unprotected.

According to Aviva data reported by webwire.com, July and August are now the most likely months for these random flood events to occur, and these are reflected in their claims for commercial premises flooding and the consequent business disruption.

Aviva maintains that almost one in three commercial properties in the UK are at some risk of flooding, according to their report. The evidence is backed by their claims from July 2021 which saw the highest number of commercial flood claims in one month, double their previous high.

Feed back from surveys of small and medium size enterprises (SMEs) show that over half (around 57%) believe that climate change is going to have some impact on their business over a 10 year period – extreme heat and flooding are their biggest concerns.

However, Aviva reckon that despite the risk, and concerns about it, few businesses, only around 20%, have actually put in place a continuity plan in case the worst should happen and their operations are brought to a standstill due to flooding.

Given its concerns, Aviva has launched a partnership with private advisory, Enterprise Nation, an organisation which provides a UK-wide network, a community of small businesses and business advisers that exist to give trusted business support. British businesses need this kind of support as they are being put at risk from extreme weather events. Their lack of awareness and preparedness for the risk is putting their survival at risk thinks Aviva.

A YouGov survey conducted for Aviva, which forms the basis of its ‘Building Future Communities’ report, found that 57% of SMEs believe climate change will impact their business in the next ten years, and a further 25% believe it will affect their livelihood within the next year. However, at lease 17% of the respondents said they were not concerned at all.

Further research by Aviva, looking into how flood risk areas and map data, shows that almost one in three (30%) commercial properties are at risk of some form of flooding. Aviva’s analysis of its claims records shows that there is an even more worrying picture, with its July 2021 claims its highest on record for commercial flood claims, double its previous high for January 2016.

Most recent data on weather shows that patterns are shifting with high risk flooding events no longer confined to winter months, but now prevalent in summer, with July and August most at risk.

The research shows that many businesses lack the information they need to ascertain the risk to their businesses, which is preventing them taking action such as planning flood mitigation strategies.

Aviva thinks its “Building Future Communities” report will help businesses understand the risks and meet the challenges they face from extreme weather. The report outlines key steps they can take now to minimise these risks.

Enterprise Nation and Aviva are to launch a ‘Plan it with Purpose’ free educational hub, which provides free online events, advice and educational resources to SMEs on a range of sustainability issues, including an educational series on climate resilience.

“Unsurprisingly, over the past year businesses have been focused on dealing with the impacts of Covid and Brexit. However, as our data shows, climate change is already having devastating impacts here in the UK, and extreme weather is set to become more commonplace in future.

“Businesses frequently bear the brunt of this damage, but are often overlooked when it comes to prevention and protection. Planning regulations often prioritise homes over businesses, which leaves many SMEs exposed to flooding and other climate risks.

“SMEs account for over 99% of UK enterprises5, and they are vital to the wellbeing and recovery of local communities – particularly after extreme weather – offering support, jobs and stability. It’s crucial, therefore, that businesses receive more support with better insight into the risks they face to help them safeguard their livelihoods from climate change.

“In our ‘Building Future Communities’ report, we call for actions to be taken to ensure that SMEs are sufficiently protected from the impacts of extreme weather. By partnering with Enterprise Nation, we can help provide advice and support to SMEs, enabling them to become more climate-resilient.

“But we’re also calling for action to be taken across industries and Government, to ensure that businesses, from design to construction, are both sustainable and resilient to the changes that climate change will bring, and that they are built to the right standards, in the right places.”

“Climate change is already having devastating impacts here in the UK, and extreme weather is set to become more commonplace in future. Businesses frequently bear the brunt of this damage, but are often overlooked when it comes to prevention and protection.” – Nick Major, MD, commercial lines, General Insurance at Aviva

Excess heat is also a concern

YOUR forum questions answered: Why is my flood insurance going up?

Flooding – both a landlord’s and a tenant’s nightmare…