The Allsop Rent Check survey is based on questioning over 2,000 landlords by BDRC Continental – the UK’s largest independent market research consultancy.

These are the report’s main findings:

The report states that 3.8m homes in England are privately rented, though this figure does vary as a more recent Government study** now puts the figure at 4m – however, whatever the figure it is still rising.

Rents consume around 30% of tenants’ income according to the report, though this figure varies quite a bit – some tenants in London are paying out around 50% of their income where rental markets are “hot”, whereas others pay quite a bit less than 30% in some parts of the country.

Allsop says the private rented sector continues to be the fastest growing tenure in England accounting for 3.8m homes or (17%) of all households, though again this differs slightly from government’s latest figure which puts the number at 18% of households.

It has to be said that given the diverse nature of the PRS it is difficult to arrive at precise rent numbers by any research organisation, including government, but Allop LLP and BDRC Continental say their figures are based on measuring actual rents agreed by more than 1,500 private landlords in England and Wales who are members of the National Landlords Association (NLA).

The Allsop report calculates average monthly rents across all UK regions, the highest for a two-bed flat in the first quarter of 2015 was recorded in London (zones 1-2) at £1,595 –  a yearly increase of £75.

The average three-bed house on the other hand recorded falls in four regions, most notably yearly falls of £65 and £50 in London (zones 3-6) and the north east. 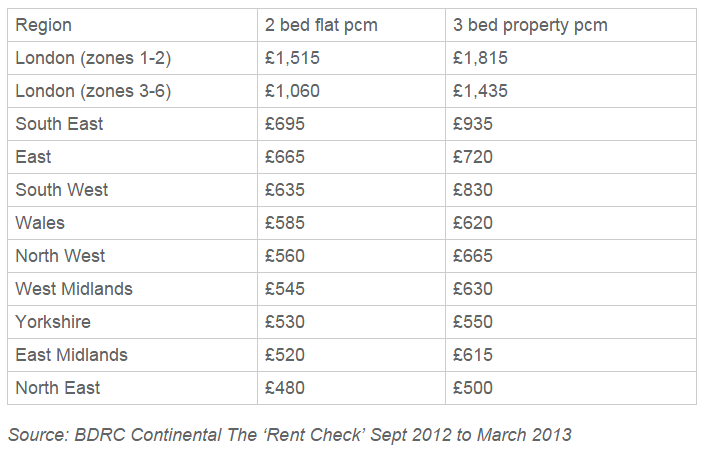 Paul Winstanley, Partner at Allsop LLP and co-author of the report, says:

“The demand for rented housing and the constraints on the wider housing market mean that rented housing is likely to retain the same income dynamics for the medium to long-term. The rented sector is growing at such a rate that landlords will share in a secure and attractive return.”

“The Rent Check report will track movements in the private rented market every six months, analysing changes in actual rental rates by property type and region. We believe it is the final piece of the jigsaw, providing essential insight into this important part of the housing market, rather than relying on the marketing material and advertised rental rates that have been available until now.”

Household disposable income (at the latest 2010 figures, measured by the ONS) assume that adults in the household earn one and a half times the regional average collectively.