A shortage of suitable housing, coupled with strong consumer demand from renters, from those priced out of the housing market and those who choose renting as a preferred lifestyle, is resulting in rents increasing at unprecedented rates.

Data released recently from the Office for National Statistics (ONS) reveal that the cost of renting in London has increased by 3.8 per cent in the year to June 2015. This is the highest rent rise in the country but reflects a longer-term trend of rising rents across the UK.

The increase represents the biggest rise since January 2013, which is good news for buy-to-let landlords, but property values have been rising at an even faster rate than rents – see the graph below. It means that landlord investors have been looking to capital growth, rather than just rental yield, as the big attraction to property investment, and has been so over the last five years.

Rental growth across the UK has not matched that in London but nevertheless has still averaged around 1.7%.

London agents, according to the Financial Times, in prime central London, have seen an increase in demand for rentals since the election and two-thirds are predicting further rent rises over the rest of 2105.

Rents have been rising in areas where tenant demand is strong and rents could be pushed even higher if landlords now try to recover the rising cost of providing rental accommodations.

Several factors are at play here: (1) there is likely to be an increase in the mortgage rate by the end of the year or early in 2016, (2) Budget measures mean that interest rate relief and other tax incentives will be removed going forward, (3) increasing regulation will mean the job of the landlord and / or his agent will become more onerous and therefore more costly.

Of the 2m or so buy-to-let landlords, three quarters are said to have some sort of mortgage, which means the majority will be under some degree of pressure to increase rents.

A recent survey carried out by the Association of Residential Letting Agents (ARLA) found 80 per cent of its members thought that rents in the private rented sector (PRS) would continue to increase over the next five years.

On the other hand, it is thought likely that capital growth will stall as the days of rapid house price growth, even in the Capital, are probably over, at least for the foreseeable future.

Landlords will no longer be able to rely on capital growth to bolster their total return and fund further purchases for their portfolios through re-mortgaging – rental returns will in future be the key to maintaining a successful business. 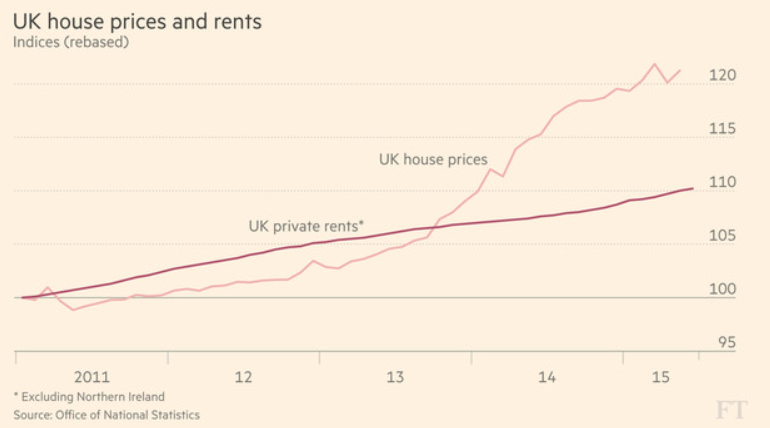 Many landlords will need to “up their game” and run their businesses more efficiently if they are to continue attracting higher rent paying tenants whilst coping with the additional burden of tax relief cuts and more onerous regulation of tenancies.

Despite all of this, the momentum of buy-to-let is such that many investors and would be investors are still betting that buy-to-let investments will pay off in the long term, regardless of short-term movements in house prices.

To be fair they may have factored in all the positives, which bode well for rental demand: a high rate of population growth in the UK, continuing inward migration, an increasing student population, and a young mobile workforce that will keep growing as the economy recovers.

It will not get any easier for first time buyers to get on the housing ladder any time soon, but it will also become more difficult for landlords to secure buy-to-let mortgages, as tighter rules on mortgage affordability are to be introduced this year.

Landlords will need to be competitive in the way they pitch their rent levels, depending on the prevailing tenant demand in their locations warn letting agents, otherwise they will be faced with longer void periods, increasing their costs further.