The latest HomeLet Rental Index shows that the average rent across the UK is now rising in line with those in Greater London for the first time and at the fastest rate since the HomeLet’s Index was started in 2008.

The latest figures from the HomeLet Rental Index are showing that the agreed rents on new tenancies in London over the three months to the end of April were 7.5 per cent high than in the same period one year ago.

This compares to a 7.4 per cent increase across the rest of the UK. Over the last 12 months rents in London have been rising at over twice the rate of the UK average, but growth rates have now converged, showing there’s been a slowdown in the growth of rents in London and an acceleration elsewhere in the UK.

The index figures for the three months to April 2015 show a steady growth in rent prices across the UK, with 11 out of 12 UK regions recording price rises.

“For the first time we are seeing rent price growth rates in Greater London converge with those across the rest of the UK. During 2014, London rent price growth far outpaced other regions but in 2015 we are seeing the emergence of a different pattern. What this tells us is that the private rental market is experiencing demand nationwide and that it is not simply a London phenomenon that increasing numbers of people are requiring privately rented property.

“While there have been periods in recent years where London’s rent price growth has moved more in line with other parts of the UK, most notably during the period following the financial crisis, the capital has always remained significantly ahead. The convergence suggests that after a lengthy period of substantial out performance in terms of rental increases, the pace of growth in London has slowed – while the rest of the UK is catching up.” 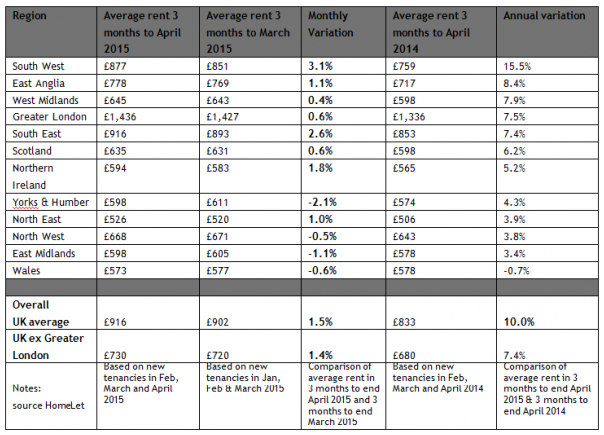