Home News Living in the same building as their serial bad tenant… a couple’s... 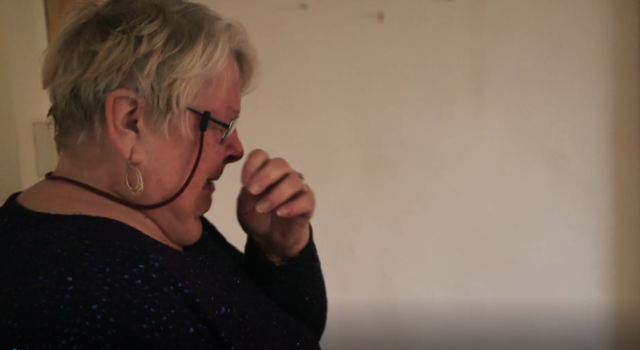 It’s been heavily publicised that a large percentage of the UK’s retirees are struggling to live off their pension, so it’s no surprise that some over 65s have turned to renting out rooms in their home, or other properties they may have, to boost their income.  However, in this week’s episode of Nightmare Tenants Slum Landlords (Monday 15th July, 9pm, Channel 5) viewers will see landlords, Jackie and John, a retired couple from a seaside village in Norfolk, locked in a battle with their non-paying tenant which is making their lives hell.  What makes it even worse, is she lives in the same building as them.

Jackie and John live in a converted Victorian building comprising of four flats. They live in one and rent their upstairs flat. On the recommendation of someone else in the village, they let the other flat to a lady called Katey who said she was desperately looking for somewhere. Their current tenants had just moved out so it was the perfect quick solution.

When the rent payments started to be delayed, Jackie and John reached out to the tenant who said she worked for herself so money was just a little tight at the moment and asked if she could pay weekly. The landlords agreed. They also helped get her another job in the local village and agreed to allow her to sub-let the other room to help her pay the rent. The landlords met the sub-tenant and were happy with the set up.

Despite all their support, the tenant then stopped paying altogether, even though she was receiving rent from the sub-tenant. After returning from a week’s holiday, the landlords discovered the tenant had changed the locks and would no longer engage in any form of dialogue.

Sadly, the situation then got even worse. The tenant made several accusations against the landlords, saying they were letting themselves into the flat and threatening her. The police were called on multiple occasions, and even though it was clear the retired couple had done nothing wrong, there was little the police could do. The stress of having their problem tenant living in such close quarters was bad enough, but being made worse because they were struggling to pay their own bills without the additional income. In a desperate state, they called Landlord Action.

Paul Shamplina, founder of Landlord Action, said: “Having dealt with this kind of tenant for many years, I had my suspicions that she had done this before, and would likely do it again. I was extremely concerned for Jackie and John’s health, who were both visibly distressed, so we took the decision to offer the tenant a sum of money to sign a deed of surrender and leave the property.”

One of the landlords, Jackie, said: “We know we are kind people who went out of our way to help Katey. We have a good reputation locally as landlords so it was heart-breaking to be in this situation. She said we would never get her out of our flat and it drove me to the verge of a nervous breakdown. Katey’s behaviour had become so challenging and she was deliberately doing things to make our lives hell. Paul saved my sanity.”Paragraph

When the tenant finally left Jackie and John’s property, it was in an extremely bad state. Their once pristine flat was trashed and filthy. She had also stolen items from the couple, including security cameras, curtains, and remote controls.

But the story doesn’t end there. She then went to another local landlord down the road, who despite having her reservations and being warned by Jackie and John, fell for her story.

The second landlord, Lynsey, said: “I should’ve gone with my gut, but she sold me a good story. She moved in and paid the first month’s rent and then it stopped. Fortunately, I manged to convince her to leave and she vacated of her own accord after three months. I was still out of pocked by £1100 and the flat was trashed, but I know I got off lightly.”

Commenting on these cases, Paul said: “The problem is that the private rented sector is a very different market today and landlords need to take stock and understand it’s a lot more work intensive. Character references and affordability checks are vital. We really hope that when the government makes changes to Section 8 that any cases with a money order for rent arrears have a CCJ applied to them to help other landlords avoid taking on serial bad tenants.”

Police have now sent out a warrant for the tenant’s arrest, and she is due to be in court on 9th August, after failing to show up on 6th June. Watch Nightmare Tenants Slum Landlords on Channel 5, Monday 15th July at 9pm.