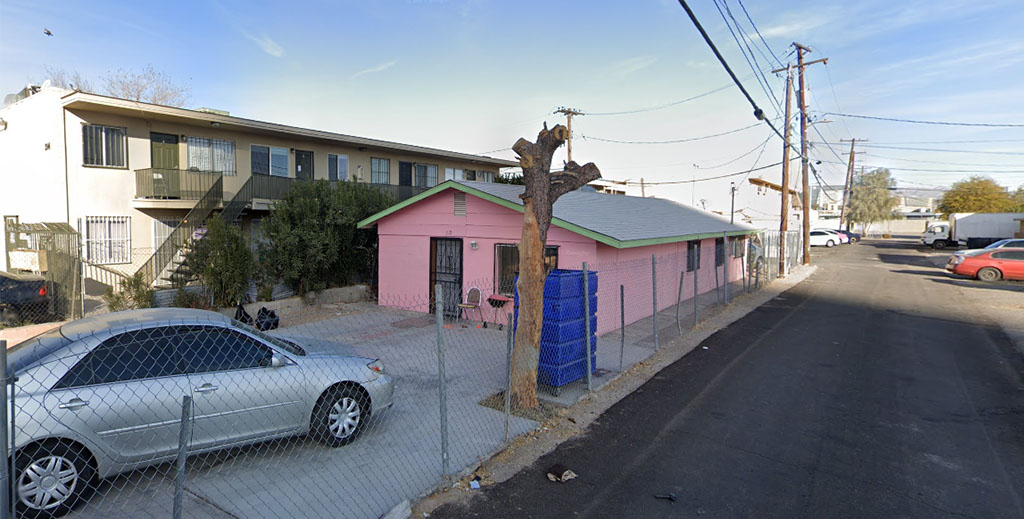 A US landlord accused of killing two tenants during an argument over unpaid rent told a witness that he didn’t want to go through the eviction process.

Arnoldo Lozano-Sanchez (pictured), 78, has been charged with murder and attempted murder after fatally shooting two women and wounding one man at his pink Las Vegas rental property in the Gateway district of the city (pictured)

Chief deputy district attorney Tim Fattig told a judge that the landlord had, “made statements about the victims not paying rent and that he was certainly upset about it” but he wanted to handle it “his way”.

A nationwide eviction moratorium in the United States expired last week but was reinstated for areas with high transmission of Covid, including Nevada, until 3rd October.

A police report obtained by the Las Vegas Review-Journal said he told a witness, Adria Ortega, several days ago that he was angry about his tenants not paying rent.

“Ortega suggested Lozano go to court to evict the people living inside his home. Lozano-Sanchez told the witness he would handle it his way,” the report said.

Police arrived at Lozano-Sanchez’s home to find one woman dead outside, the wounded man stumbling out the front door and another woman dead in a bedroom.

Another tenant was in the house during the incident but wasn’t shot; Carlos Lopez told police that he saw Lozano-Sanchez go into a bedroom where a woman pleaded for her life, multiple gunshots were fired and the wounded man ran out. Lozano-Sanchez was then seen leaving the bedroom, smiling.

Lozano-Sanchez allegedly asked a neighbour to help him dispose of the gun, but police found it in a nearby bush.