The UK economy is doing better than expected post Brexit, with the latest quarterly growth figure accelerating to 0.4%. This is well above the forecast 0.3%, which adds weight to arguments that interest rates will rise for the first time in around 8 years at next week’s Bank of England MPC meeting.

This is likely to be accompanied by a withdrawal of monetary stimulus over the coming months, if the economy and price pressures keep growing, Bank of England Governor Mark Carney said in a recent speech.

This does not mean there is not still considerable risk in the UK economy, given how households, businesses and financial markets might respond to the process and outcomes of our EU withdrawal.

Economists had predicted that the mini slow-down over recent months would leave GDP growth stuck at 0.3pc for a third consecutive quarter, but figures coming through now show strong manufacturing growth and a steady expansion in the services industries, pushing the UK economy steadily upwards.

“There is nothing in this or other recent data to suggest that the slowdown is in danger of turning into a recession.”

The pound has climbed 0.6pc against the dollar on these stronger figures, regaining some of the losses incurred in recent days.

Darren Morgan, head of national accounts at the Office for National Statistics has said:

“Growth in the third quarter continued at a similar rate as seen in the first half of the year…Services, led by increases in IT, motor trades and retail, continued to drive GDP growth.”

“Manufacturing also boosted the economy with an improved performance after a weak second quarter. However, construction output fell for the second consecutive quarter.”

Five years ago the Bank of England cut interest rates to 0.5%, a record low. Since the Bank’s inception at the end of the 17th century, interest rates have varied considerably – from 0.5% in 2009 to an all-time high of 17% in 1981 under the then Labour government of Harold Wilson. However, Mark Carney has been reminding people that this time rises in base rates will be small, and the pace will be gradual.

How would a rise affect mortgage repayments?

According to the Nationwide Building Society, a 0.25% rise in base rates would have a fairly modest impact on anyone on a standard variable rate (svr) mortgage. On the average mortgage of £125,000 (assuming 20 years still to pay) an increase of 0.25% would increase monthly payments by around £180 per year. 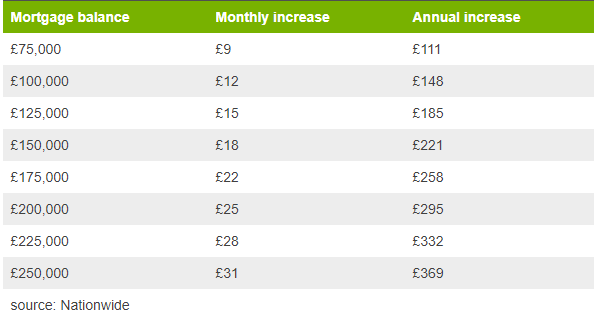 Bank hints at interest rate rise in May