The UK housing market has staged an incredible recovery since the financial crisis, so does that mean houses are now too expensive, or can house prices just keep going up?

A common method of valuing both the stock market and housing market is the trusty old PE ratio.

Because stock market earnings are quite volatile, I think it’s best to “cyclically adjust” those earnings by comparing the price of the stock market (e.g. the FTSE 100) to its 10-year average earnings.

That’s good, because it makes the whole thing a lot easier to calculate.

Home buyers are an obvious choice in terms of whose earnings to compare house prices to. After all, they’re the people buying houses, so what sort of multiple they have to pay is important.

The Halifax House Price Index web page currently has a link to a spreadsheet called “Historical House Price Data”, which contains the house price and earnings data for home buyers back to 1983.

Using the Halifax data, since 1983 the median (i.e. middle) value for the UK house price to (home buyer) earnings ratio has been 4.1.

However, despite that volatility, in the long-run house prices tend to stay somewhere around 4-times (home buyer) earnings, primarily due to supply and demand.

The “fan chart” below is my attempt to show how house prices have moved above and below the long-term average price to earnings multiple of 4, and that average house prices are more likely to be closer to that multiple than far from it. 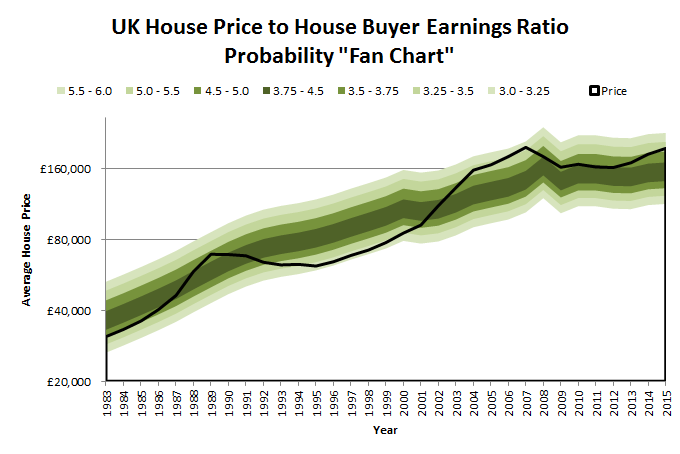 A few notes on the fan chart:

House prices do not always go up!

As the chart hopefully makes clear, the value of the average house trading at the average PE multiple of 4 (a price which I tend to call “normal” or “fair”, and represented by the dark green band in the middle) has increased substantially since 1983.

In fact, in 1983 the average house price was £31,000, so by this measure the market at that time was actually slightly cheaper than “normal”.

This put the market on a house price to earnings ratio of 4.8, well above the average of 4 (and the PE average was much lower back then too).

The mid-90s saw a massive slump in house price to earnings ratios, as house price values fell year after year while earnings continued to increase.

By 1995 the average house was just 3.1-times the average home buyer’s salary. When I bought my first home in 1996 (a 4-bed flat in London) it was valued at just 2-times my measly salary. I didn’t realise how lucky I was to be buying at such reasonable valuations.

And then of course we had the Great Property Bull Market, which lasted approximately from 1995 to 2007.

By the end of that heady period, average home buyer earnings had swelled to £34,600 and the average house price had ballooned to more than £199,000, giving the market peak a PE of 5.8, almost 50% above the long-run average.

The UK housing market is clearly expensive relative to its historic price to earnings average, although that’s hardly news to most people.

According to the latest data from Halifax, the average house price is back above £196,000. The housing market’s price to earnings ratio has also crept back up to 5.1 in recent months, having cooled off somewhat to 4.4 during the post-financial crisis slowdown.

Since 1983, the UK housing market’s price to earnings ratio has been lower than it is today more than 87% of the time. The only time the ratio has been higher was during the absolute peak of the pre-financial crisis property boom.

Because of the supply and demand factors I mentioned before, the most reasonable guess (as that’s all it can ever be) for medium-term (5 to 10 year) house prices is for the market’s price to earnings ratio to return to its average value.

Of course, I’m not saying the market is going to collapse in value to that level. It could take years for the housing market’s PE to revert back to its median value. In fact it probably will as the housing market usually moves quite slowly, especially when compared to the stock market.

However, over perhaps a 10-year timeframe, I would say the most likely direction for the house price to earnings ratio is downward, back towards 4.

This currently implies a forecast average house price of £154,000, although that “fair” or “normal” value will increase over the years as home buyer earnings increase, hopefully in line with or faster than inflation.

To help you visualise how current valuations impact future returns, have a look at the UK housing valuation “heat map” below. 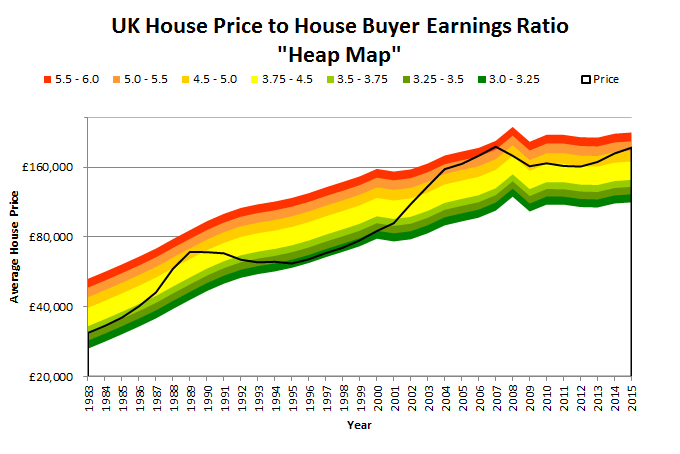 With Halifax currently putting the average house price at £196,000, the UK housing market is currently in the 5.0 to 5.5 PE range (the orange zone on the heat map, implying pretty “hot” valuations).

Using the terminology from my FTSE 100 valuations, that makes the UK housing market “expensive”. If average house prices exceed £207,000 the housing market will move into the “very expensive” red zone.

Note that the earnings in that regional breakdown are UK average earnings and not average home buyer earnings, and in fact that’s my final point:

One feature of the housing market is that as houses become more expensive, people on lower wages cannot afford to buy them. As a result, the average earnings of home buyer’s increases as those on lower incomes have no choice but to rent.

The ratio between UK average earnings and average home buyer earnings between 1983 and today has averaged about 1.55. Today the ratio is 1.69, which is about as high as it has ever been.

That means house prices are likely to look even more expensive in terms of PE, when UK average earnings are used in the ratio instead of home buyer earnings.

I think it’s worth having a look at the long-term relationship between UK house prices and UK average earnings, so I’ll do that in a follow-on post.