As announced recently by Housing Minister Brandon Lewis, from October 2015 Landlords will be required by law to ensure working smoke and carbon monoxide alarms are installed in rental properties in England. The information below is intended to help you understand your responsibilities in relation to the new legislation.

Why have these changes been made?

This legislation has been proposed to address the imbalance between protection levels for private tenants in contrast to residents classed as owner occupiers, or social housing occupants.

It is estimated that the national percentage of all households with a working smoke alarm currently stands at over 90% compared with 83% in rental properties. Although a seven percent difference between the level of protection in rental properties and the national average may seem relatively minor, the numbers are much more compelling when qualified in terms of casualties. Between April 2013 and March 2014, 97 people died and 1900 were injured in domestic fires affecting properties where no smoke alarm was present.

Why do you need to install a CO detector?

The Royal Society for the Prevention of Accidents reports that there are approximately 50 deaths per year and over 1100 hospital admissions annually as a result of carbon monoxide poisoning in the UK. Carbon monoxide (CO) is a tasteless, colourless and odourless gas that is produced by incomplete combustion. A common source of CO in a domestic property would be a faulty appliance such as a boiler.

Statistics show that residents of privately rented accommodation account for a much greater proportion of annual carbon monoxide incidents than could be expected. A report by the Gas Safety Trust into carbon monoxide risks per housing sector showed that the likelihood of an incident in privately rented accommodation was significantly higher than that associated with any other housing sector. According to statistics gathered since 1998 residents of rental properties are on average three times more likely to suffer a CO related incident.

Although landlords are already obliged to have a yearly check carried out on any gas appliances, this alone cannot guarantee protection from carbon monoxide. The installation of a CO detector is quick, easy and cheap, and ensures your tenants are protected from what is often referred to as the ‘silent killer’.

Current advice from the Health and Safety Executive already states that a CO detector should be installed in rental properties, but this has always been down to the discretion of each landlord or letting agent. From October 2015 it will become law that that any high risk room, i.e. those containing a heating appliance, must have a CO detector installed.

What happens if you don’t act on these changes?

Failing to comply with the legislation planned to come into force from the 10th of October 2015 will leave you open to a penalty of up to £5000.

What does this mean for you?

As a private landlord, a professional landlord, or a letting agent, you must consider the effect this legislation will have on your portfolio.

There has previously been no legislation requiring landlords of properties let to single family units and built prior to 1992 to have smoke alarms. However, these properties will now be subject to the new legislation, meaning smoke alarms will need to be installed by October.

HMO’s are already subject to tighter legislation in accordance to The Housing Act 2004, and the Regulatory Reform (Fire Safety) Order 2005.

It is likely, however, that Landlords of all of the above property types will need to consider their carbon monoxide detector provision in light of the new regulations.

The table below shows an overview of current responsibilities, and the effects of the impending legislation changes on various property types. 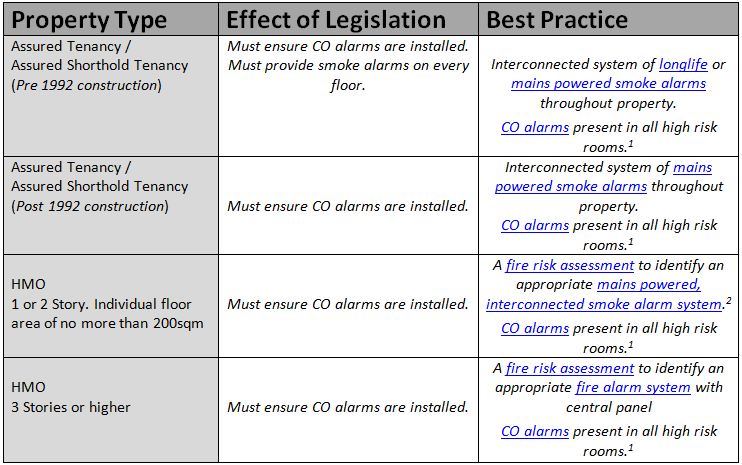 1 – High risk rooms are defined as “any room of the premises which is used wholly or partly as living accommodation and contains a solid fuel burning appliance”.
2 – As dictated by BS5839-6 2013.