Old Kent Road is no longer the cheap London choice, with average monthly rent for a two bedroom property on Old Kent Road now £1,950 a month.

Mayfair and Park Lane still some of the priciest areas in London – but have competition from Vine Street and Bond Street.

Renters can head to Zone 3 for the ‘New Old Kent Roads’ of London.

If you’ve ever played Monopoly you’ll know Old Kent Road wasn’t a big money maker, however a real life version of the popular board game would suggest otherwise. Average monthly rent* for a two bedroom property on Old Kent Road now fetches £1,950 a month, compared to the £60 in the game – a 3,150 per cent increase.

In real-life owning a property in the South London area is now rather more lucrative, but on the other end of the scale, it’s no surprise to see that Park Lane and Mayfair properties are still some of the most expensive, with monthly rents averaging £5,200 for a two bedroom property – nearly a 2,000 per cent increase from the board value of £350 and £400 respectively.

But the top two areas are now beaten by Vine Street and Bond Street in real life, with rent for a similar property in those areas now averaging a whopping £5,300 a month compared to £200 and £320 respectively – a 2,500 per cent increase.

Research put together by letting agent Rentify suggests that while Old Kent Road and Whitechapel Road are still the cheapest streets on the Monopoly board, they’re far from the cheapest locations in London to rent a property.

If you want a two bedroom property then look to zone three, where there are number of cheaper options for renters.

Rentify CEO George Spencer said: ‘Old Kent Road once was the joke of the Monopoly board, but landlords who have invested in the area are the ones laughing now.

‘Over the past 80 years since Monopoly was launched in the UK prices in London have just gone up and up – but for renters this is no game. 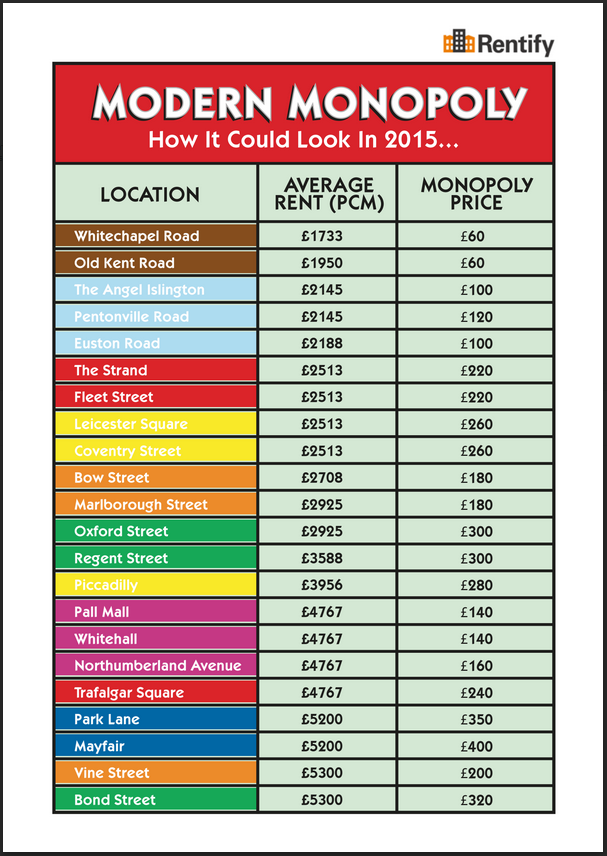 ‘With so many being priced out of central London, it seems clearer than ever that more needs to be done to lower planning restrictions and build more homes.

*Figures from London.gov.uk, based on a sample covering the last 12 months