Abandonment is when tenants move out of a landlord’s property before the tenancy has ended, without informing their landlord.

This is highly inconvenient for landlords as it usually involves rent arrears and leaves the landlord wondering if the tenant is going to return and claim his or her tenancy back – under the Prevention from Eviction Act 1977 it is a criminal offence to take over a tenancy before it has properly ended.

The tenant still has a legal right to return and take up residence at any time and it would be a criminal offence if the landlord did anything, such as re-letting, to prevent the continuation of the tenancy.

According to a recent report by the National Landlord’s Association (NLA), on average more than a third (36 per cent) of landlords in the UK have had a property abandoned by tenants. This leaves landlords with the only safe option in this situation to go through the legal process for regaining possession of the property which can take several months.

The NLA have identified the North East of England as a particular trouble spot for abandonment, with an average of 58% of buy-to-let investors saying they have had a property abandoned, and just over half (51 per cent) of landlords in the North as a whole have also experienced the issue.

Alternatively the South gets off more lightly, with three in ten (31 per cent) of landlords in the South West of England saying they have had a property abandoned before – the lowest proportion across the UK – with a third (33 per cent) of London landlords having had to deal with the problem.

The report comes as the Housing and Planning Act containing measures to tackle the abandonment problem has received Royal Ascent.

“The process of recovering an abandoned property is too long, frustrating, and costly for landlords at the moment.

“Many people will be shocked by just how common this problem is, and landlords will be relieved to know that the Housing and Planning Act will create a new process to deal with the issue, giving them far greater security and peace of mind when recovering  properties they believe to have been abandoned”.

The Housing and Planning Act also contains proposals to allow local councils to keep hold of the proceeds they make when carrying out landlord prosecutions* as well as introducing stiffer civil penalties and banning orders for landlords found breaking the law.

Mr Lambert says on this:

“We’ve long argued that councils should be able to hold on to the money they make when carrying out landlord prosecutions as this better enables them to implement long-term enforcement strategies to tackle the rogues.

“The Government missed the chance to apply these changes in today’s Queen Speech, but we hope they waste no further time in giving councils these important powers”. 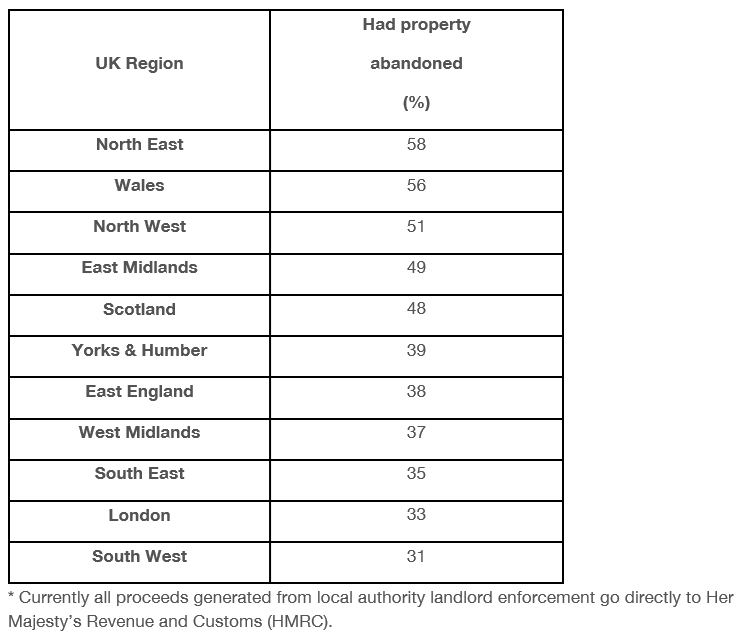 For more information on the current situation with abandonment see:  www.landlordzone.co.uk/information/abandonment

Bear in mind some of this information on abandonment will need to change with the introduction of the new rules.