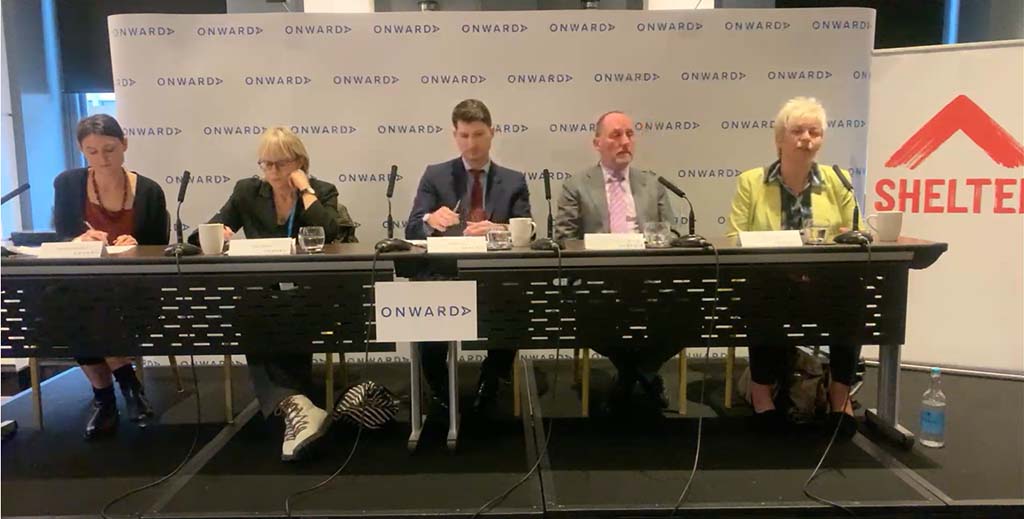 Housing minister Eddie Hughes (pictured, 2nd from right) has given the strongest indication to date which of the government’s proposed rent reform policies are to be included within its much-expected White Paper.

The Walsall North MP told a fringe meeting at the Conservative party conference in Manchester that both a landlord register and a lifetime rental deposit scheme in England were set to go ahead.

Landlords may have some breathing space before they do – Hughes said his officials were still ‘half way’ through the policy formation process, indicating that the White Paper is unlikely to be published until the New Year.

The minister also said he was keen that the new measures would ‘not have unintended consequences’ for either landlords or tenants and that therefore his department was proceeding carefully.

The housing ministry has form on this front – for example its Tenant Fees Act has made it harder, not easier, for tenants with pets to rent homes – many MPs, Lords and pet campaigners have argued.

Hughes said a landlord register would only pull together information already available from different sources, and that similar schemes in both Scotland and Wales had already been successfully implemented without driving out landlords from the private rented sector.

Other speakers at the event including Grimsby MP Lia Nici (pictured, far right) also said that it was time English councils were able to understand who the landlords are within their boundaries, and which properties they rent out.

Hughes also revealed that the proposed lifetime deposit scheme, which would enable tenants to ‘passport’ their deposits from tenancy to tenancy would not expose landlords to extra financial risk and cost, as many have feared.

Hughes said his department had experts looking at how it would work best, but that it would most likely be an insurance-backed scheme. LandlordZONE understands this is likely to be similar in form to the ‘alternative deposit’ schemes available within the rental sector.

The meeting, which was organised by centre-right thinktank Onward and sponsored by Shelter, also discussed the government’s plans to abolish ‘no fault’ Section 21 evictions, during which the minister gave assurances that the new system would offer tenants security from retaliatory or unnecessary evictions but also enable landlords to repossess properties for good reasons – such as to sell up or move back in.