After the shock announcements of the coming changes in taxation for buy-to-let investors in the Summer Budget, and the more recent Autumn Statement mini Budget, landlords could perhaps be forgiven for missing the announcements on the digitisation of the self-assessment tax process over the next few years. This will affect landlords and others who produce an annual tax assessment return to HM Revenue & Customs (HMRC).

The Chancellor said in his statement, referring to the government’s digital strategy and HMRC Digital Tax Accounts:

To “make the government simple to deal with by investing £1.8 billion in digital transformation, replacing tax returns with digital tax accounts, and building one simple payment mechanism for all central government services”

The plan is that HMRC’s contribution to the wider Whitehall drive towards the concept of “government as a platform”; a strategy which was recently endorsed by the head of the civil service, Sir Jeremy Heywood.

Despite many high profile calamities with government IT systems over recent years, most notably the reputed wasting of something like £12bn on an NHS IT system under Labour’s Andy Burnham, a system that never materialised. The present government appears to be going full steam ahead with several major IT systems including the one needed to run Universal Credit, real time PAYE, and now this Digital Tax Account. 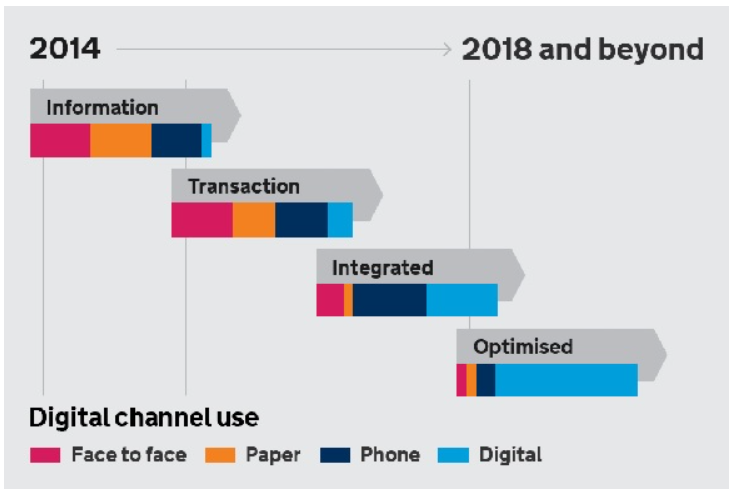 HMRC’s digital strategy published on the Gov.UK website describes a roadmap for developing digital services (see chart above produced by Computer Weekly) a plan over 4 years to improve how taxpayers and businesses engage with HMRC.

A central plank in the thinking behind personalised digital tax accounts will be a “multi-channel digital tax platform”. The planned Digital Personal Tax Accounts will allow users to “file, pay and make changes across all of their taxes, in a single place” based on real-time data.

Taxpayers will be able to log on and see their tax statements, details of tax codes, file tax returns and make payments online, all in real time – totally up-to-date. Instead of spending time waiting on a telephone for assistance, HMRC say they will service a “secure personal mailbox facility” to allow them to communicate electronically with taxpayers – that’s the theory at any rate.

HMRC say that these individual digital tax accounts have not been possible up to now due to the “siloed” nature of HMRC’s systems, which means that past IT systems were built around particular taxes, PAYE and national insurance (NI) being typical examples. In future, all new systems will be individual taxpayer focussed.

While not many of the items listed in the chart above have specific date deadlines, the strategy outlines the key elements expected to be put in place by 2018.

“All of our customers and the businesses we serve will have access to a personalised online tax account. They’ll be able to file, pay and make changes across all of their taxes, in a single place. Customers will increasingly be able to get what they need from us online,” says the HMRC strategy document published online.

“We will use the data and intelligence we have about our customers to present the personalised service. They will feel that we have a really good understanding of what is going on in their lives. When they deal with us it will be as though we are picking up a conversation where they left off – rather than starting all over again.”

HMRC say work is now underway on a “multi-channel tax platform” including the sort of customer relationship management (CRM) capabilities commonly used by banks and retailers to offer co-ordinated services to customers across several channels.

“We are building a new digital platform with a common infrastructure that links existing and new systems,” said the HMRC strategy document.

“This means we will be more consistent and responsive in the way we provide our services. The platform will be secure, reliable, flexible and scalable, allowing us to develop services quickly. We will be able to manage customer contact flexibly through a range of communication channels including phone, secure messaging and webchat.”

HMRC expects to see “active relationships develop with customers through digital tax accounts and assisted digital services”, during 2014 or 2015, along with the “first wave of digital services for individuals and businesses designed to help customers pay the right tax at the right time”.

The online documentation says that by 2018 “dealing with HMRC through personalised, multi-channel digital services [is to be] the norm for the majority of customers”.

HMRC says that the move to digital services will require new skills within the departments, and a new “culture and mind-set” involving “an increasing number of cross-functional service delivery teams”.

“Every customer in the UK will have their own personalised digital tax account, so we can help make it simpler, quicker and easier to pay the right tax at the right time. This will have big implications for our staff, as well as our customers, involving changes to the types of job we will be doing and the skills we will need,” said HMRC.

The bulk of HMRC’s IT is systems are currently provided under one of the government’s biggest outsourcing deals – an £800m-per-year Aspire contract, a consortium led by Capgemini with Fujitsu as the key partner.

Currently, HMRC issues 245 million paper forms a year, sends 200 million outbound letters, and receives 73 million customer support phone calls, plus 70 million items of post. The aim of the digital strategy aims to change this mix of interactions so that it is all predominantly digital by 2018.

Mr Osborne has called it “a revolutionary simplification of tax collection”. Let’s hope it’s more successful than the NHS “universal record system” which never materialised, but anything must be better than the abysmal support HMRC have been giving via the telephone.