However, according to the average rents table, students attending six of the UK’s leading universities (Cambridge, Oxford, Imperial College London, London School of Economics, Exeter and University of Surrey) are likely to pay on average between £20 and £58 more per week than the national average.

Lancaster University was the only top ten ranked university (The Complete University Guide for 2016) where average rental value for student accommodation fell below the national average at £78 per week.

London (£140), Cambridge (£124), Kingston (£115), Aberdeen (£109) and Guildford (£104) are the cities with the most expensive average rental values.  Interestingly, despite being some of the most expensive places to live, London and Kingston do have some of the greatest average differences in rent between lowest and highest, ranging from £80 to £195 and £19 to £139 respectively.

Guildford and Aberdeen have some of the least variation with an average difference of £39.  Despite seeing its average rental value fall by £9 per week, Uxbridge is still in the top six most expensive locations, down from second place last year, and Oxford has climbed two places to seventh in 2015.

Plymouth, Exeter, Nottingham and Liverpool were recorded as having the greatest range in weekly rents, a difference of between £138 and £146 between the lowest and highest rents recorded in these cities. For example, the lowest recorded rent in Plymouth was £39 but the highest was £185.

Bolton (£62), Middlesbrough (£62), Wolverhampton (£62), Stockton (£49) and Walsall (£48) offer accommodation with the lowest average rent per week, none of which are home to universities in the top thirty of the 2016 league table.

Luton, Bangor and Derby have seen this year’s greatest increases, up on average 20% on 2014, all moving from offering accommodation at a renal cost below the national average to being on or above this year’s average. 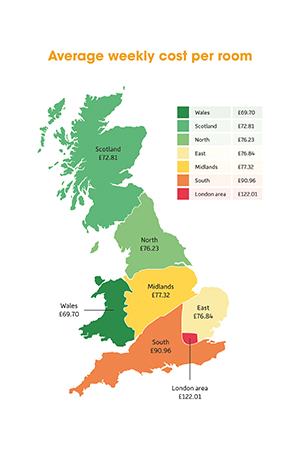 Simon Thompson, Director of Accommodation for Students comments “It’s great to see that the overall market has remained stable over the last year, this is positive for both investor landlords and students. Unsurprisingly, the north/south divide in rent values remains apparent, just as in the private rented sector.

Naturally rental increases in some areas will be governed by student demand, often determined by what courses are available, but it is interesting to see that there appears to be some correlation between the highest ranked universities and cost of student accommodation.

Bills inclusive rental options are increasingly prevalent which shows landlords are reacting to student needs.  Anything which helps students to manage their finances is appealing and I think this trend will continue to grow over the next few years as the cost of attending university creeps up”

About Accommodation for Students

Accommodation for Students was founded in 2000 by Simon Thompson and William Berry. It provides a powerful search engine accessing a nationwide database of student accommodation which enables students to find properties, private halls and housemates fast.

Students can now also deposit their accommodation requirements using the sites Property Alerts service and get properties e-mailed to them on a daily basis that match their requirements. The landlord admin suite interface allows landlords to directly upload and edit their property details and pictures on to the site which allows for ease of communication with students.

Accommodation for Students was nominated for Best Use of Web in the 2005 and 2004 New Media Age Awards and was highly commended in the Best Industry Innovation category at the inaugural 2002 Property Business Awards. In June 2011 Simon Thompson was named one of the top 40 business people in Manchester, courtesy of the Crains Manchester Business Paper 40 under 40 awards.