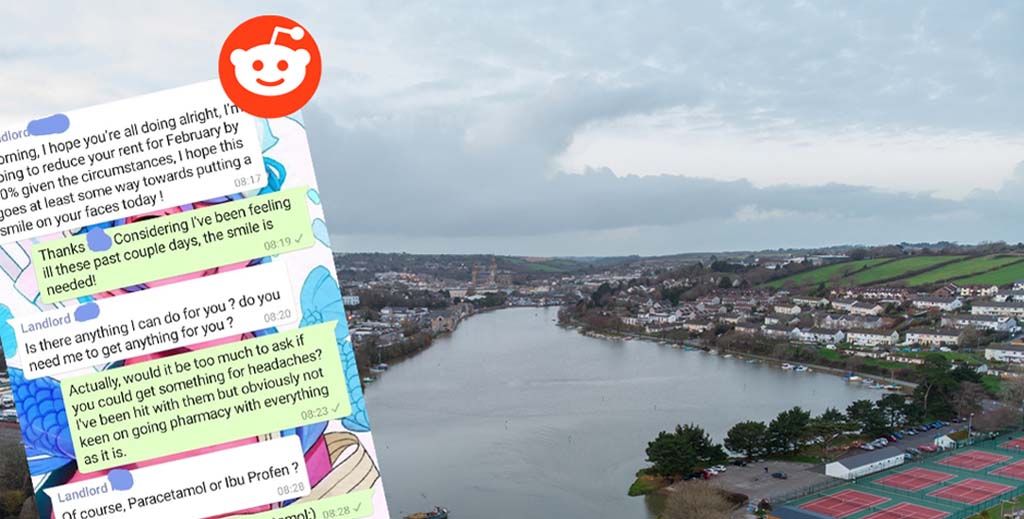 A landlord who halved a sick student’s rent and delivered painkillers while she was stuck in her flat has been praised by social media users around the world.

Katerina Callaghan, 20, from Truro, Cornwall, revealed she had received a surprise text from the landlord who announced: “I’m going to reduce your rent for February by 50% given the circumstances. I hope this goes at least some way towards putting a smile on your faces today!”

When she texted back to say thank you, she mentioned she hadn’t been feeling well. The landlord then asked: “Is there anything I can do for you? Do you need me to get anything for you?” He immediately responded to her request for some paracetamol, which he dropped off at the flat.

She’s now shared a screengrab of the text conversation (pictured) on the Reddit page HumansBeingBros, which is dedicated to stories of good deeds. #

The Falmouth University student explains that she’s lived in the flat since last August with college mates. “Our landlord is normally someone to check in on us,” says Katerina.

“On his first day of meeting our group he brought us cupcakes. He’s often expressed some level of worry as I deal with chronic pain and he’s asked if I have needed things before. He was actually rather sweet – just dropped the painkillers off and left in order not to disturb me.”

The post has attracted hundreds of comments and more than 10,000 ‘upvotes’. “The reaction on Reddit has been support and love for my landlord,” she adds. “People seem to really deal with some terrible landlords, and I’ve got a couple of stories from other users that have made me all the more thankful for the kindness.”