Grainger the UK’s biggest stock market listed residential landlord keeps growing as its UK operation has prospered with the latest rental property boom. So much so, Grainger the £1bn landlord has decided to dispose of its German operations and concentrate on the UK market.

Over the last three years Grainger’s share price has tripled. With a UK election, which caused a lot of uncertainty for the rental property industry, the private rented sector (PRS), now firmly behind it, Grainger appears to be going all out for UK expansion and increasing returns in the light of stake-building by activist investor Crystal Amber.

In June, the fund increased its holding to 12.8 million shares, to over 3% of the business. Funds like this look to unlocking the reversionary surplus value, the difference between the reported market value of its properties and the vacant possession value, estimated by Grainger to be 120p at the time of its half-year results in May.

Grainger’s reversionary business, where it buys regulated tenancies at a discount before selling them at a profit when tenants leave, sold its vacant properties at around 8.3 per cent above September 2014.

Strong demand in Grainger’s existing PRS portfolio show rents up 6% year-to-date on a like-for-like basis, and 2.3% on renewals. For the previous 12 months accounting periods there figures were respectively, 4.2% and 3.2%. The company has spent more than £83 million on 929 tenanted PRS housing units so far this year, and its PRS portfolio of 3,400 units will produce gross rental income projected at around £6.6 million.

As stated above, the company disposed of vacant properties at on average 8.3% above their September 2014 valuations and at average margins of 51.2%. Last year the company reported a 12.75% price increase at 48.6% margin. Property sales currently ongoing and in solicitor’s hands total £214 million which is just below the previous year’s figure at £228 million.

As reported by www.iii.co.uk this gives the company’s yield on cost is 7.9% as calculated by Numis Securities:

“Importantly this is replacing reversionary assets where the average yield on vacant possession value is sub 2%, says analyst Chris Millington of Numis.

“This yield differential highlights how converting cash from reversionary sales into market rented opportunities will boost the rent roll significantly. Grainger has a pipeline of c.2,000 market rented units and we believe the group could potentially purchase 1,000+ units per year going forward.”

Chris Millington has said he likes the progress Grainger has made in simplifying its structure and creating a more predictable and sustainable business model by reinvesting reversionary cash-flow into market rented assets. 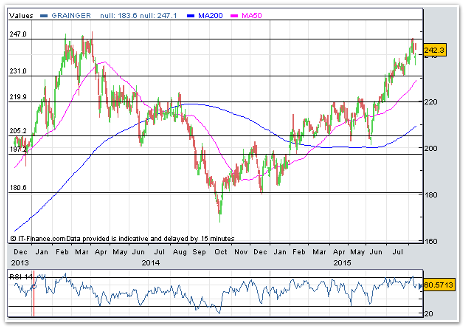 “This will boost the rent roll, which alongside cheaper finance costs (post the recent refinancing) and a more simplified structure, will improve P&L returns and enable Grainger to improve distributions to shareholders, which in turn should help the share price close the discount to net asset value.”

A debt re-financing has reduced the company’s cost of debt as Grainger has instructed Lazards, the investment bank, to look to selling its residential property assets, carrying a valuation of £140 million, in Germany.