The English Housing Survey 2013-14 which has just been published is the latest available national survey of people’s housing circumstances and the condition and energy efficiency of housing in England.

Throughout the 1980s and 1990s, the proportion of private sector households stayed steady at around 10%.

However, the sector has undergone sharp growth since then and has doubled in size since 2002, driven by a number of factors.

(1) In the late 1990s rent controls were removed, and
(2) assured shorthold tenancies (ASTs) became the standard, giving greater flexibility in the length of tenancies, and
(3) Lenders also introduced the buy-to-let mortgage at around the same time.

These factors coincided with rapid demographic change in England which brought: an increase in single living; more couples splitting-up; increased job insecurity; shorter employment contracts and more job mobility; increased immigration and a larger student population; and a housing shortage which rapidly increased house prices to the point where young first-time buyers found find it difficult to raise the money for a mortgage deposit.

Couple all of this with financial markets that have been extremely volatile and offer meagre returns on cash investments and those with capital to invest saw housing as a safe bet for buy-to-let type investment.

These changes brought to the scene a new breed of landlord, as far from the image of the traditional aristocratic land-owner you can get. Enter the middle class and working class landlords, 70% of whom own just one or two buy-to-lets which many of them see as their pension nest eggs. It has been estimated there are now around 2m such landlords in the UK.

– In 2013-14, the owner occupied sector remained the largest tenure. But for the first time, the proportion of households who owned outright was larger than the proportion who owned with a mortgage.

– Overcrowding remained uncommon in 2013-14, but under-occupation was far more prevalent, especially in the owner occupied sector.

– In contrast, half of all owner occupiers were under-occupying their home, substantially higher than private renters (15%) and social renters (10%). Housing and personal factors were associated with how satisfied someone is with their life.

– In 2013-14 the English Housing Survey asked well-being questions for the first time. Analysis has revealed that people’s personal and housing circumstances were associated with differences in their life satisfaction. The energy efficiency of the English housing stock continued to improve.

– Since 2001, the proportion of dwellings with condensing boilers has increased from 2% to around a half of homes (49%) in 2013 (11.3 million dwellings). The number of non-decent homes in England continued to decline.

– Housing association renters and households with couples with dependent children were most likely to have working smoke alarms. 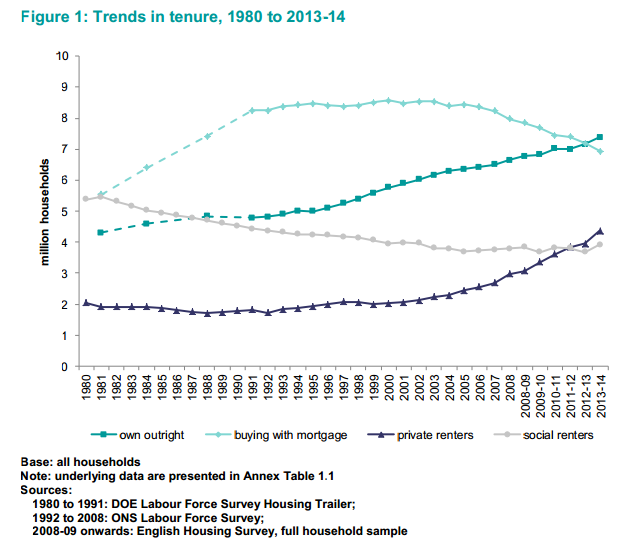 Housing minister Brandon Lewis has thrown the future of the English Housing Survey into doubt when he says it has an “excessive” cost at £4m a year.

But landlord representatives from the Residential Landlords Association have written to the Department of Communities and Local Government (DCLG) saying that the survey is “a vital source of housing information and statistics, but particularly for statistics on the Private Rented Sector.”