As home ownership declines, one in three will rent in retirement, either because they have rented all their lives, or because they sold up to reduce costs and raise some capital.

Academics fear that housing costs for the renting group in old age could be a “ticking time bomb” for government as housing benefits claims could skyrocket because of pensioners unable to afford rent payments. 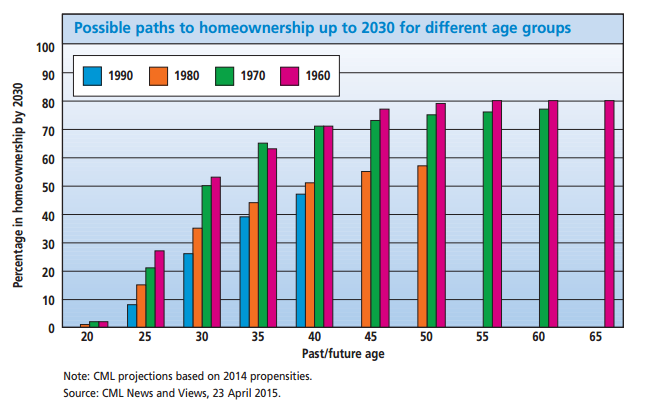 Most pensioners today have retired mortgage free or in the final stages of paying off the debt, but says Professor Steve Wilcox of the University of York’s centre for housing policy, in a report produced by the Chartered Institute of Housing (CIH), many of tomorrow’s pensioners will lack the security that owning their own homes would have given them.

Whilst tomorrow’s pensioners are likely to face more austerity, the picture has been entirely different for many of those in retirement today, particularly those who own their own homes. Office of National Statistics (ONS) figures show that pensioners have become considerably wealthier with protected state pensions and better private pensions, whilst workers today have struggled with pay freezes and cuts.

Whilst the private rented sector has doubled in the last 10 years, some estimate that private landlords will rent to up to one-third of households by 2030.

According to a recent Price Waterhouse Cooper’s (PwC) report, house price growth in the UK has decelerated over the past year, especially in London. But they project that average UK house prices could rise by around 5% this year (2015).

They are assuming that the supply of new homes will continue to be relatively sluggish, and that house prices will keep growing at around this rate for the rest of this decade. In their baseline scenario, the average UK house could be worth around £360,000 in cash terms by 2020.

House prices have risen and social housing supply has remained constrained, which means the number of households in the private rented sector has more than doubled since 2001, rising from 2.3 million to 5.4 million by 2014, around 20% of the total.

PwC say this trend is particularly strong in the 20-39 age group, where more than half will be renting privately by 2025. PwC predict that the rise of ‘Generation Rent’ will continue.

PwC has projected a further decline to 7.2 million by 2025 as limited housing supply, affordability and mortgage availability make it harder for first time buyers to get on the housing ladder.

The other key tenure trend identified by the report is that a greater number of people than ever before own their own home outright. This now accounts for 8.4 million households or 32% of the total. PwC expect this to rise to 10.6 million households, 35% of the total, by 2025. A key driver is the rising proportion of over 60 year olds in the UK, who are far more likely to have paid off their mortgages.

Mirroring the results of the CIH study, PwC find that for younger generations, renting privately is now the norm and many will only become home owners quite late in their adult lives, if at all.

A significant rise in the supply of affordable housing might change this in the long run, and the Summer Budget proposals may have a calming effect on the private landlord buy-to-let boom, but seems unlikely to occur fast enough to stem the rise in Generation Rent between now and 2025. 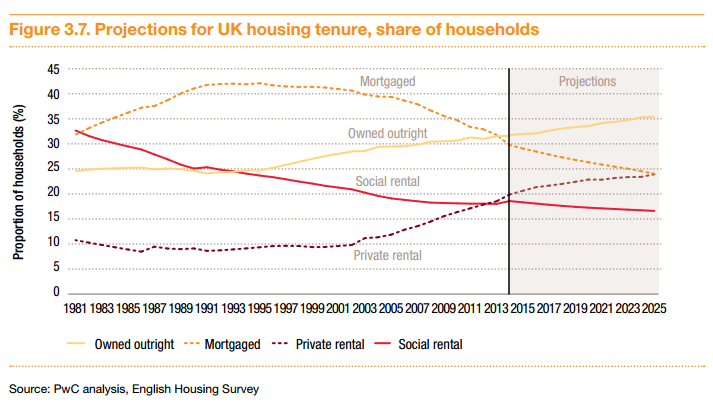 As Home Ownership Declines, One in Three will Rent in Retirement – http://t.co/RMmwTf8hW7