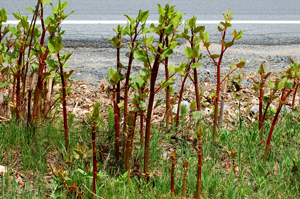 The large herbaceous perennial with its bamboo-like appearance became infamous in Britain for it’s threat to buildings. Its rapid growth, its size and most importantly the damage it can do, made it the villain of the horticultural world, and it became feared by property owners and mortgage lenders alike.

Until recently, the presence of the invasive plant coming within seven metres of a home could cut up to 15 per cent off the property’s value. It meant banks and mortgage lenders were reluctant to lend to buyers given the threat to the property.

However, rather like Covid, it seems, this threat is being downgraded.

Japanese knotweed is no longer seen as such a serious threat to property valuations, that’s according to new official guidance put out by the Royal Institution for Chartered Surveyors (RICS) for its chartered building surveyors.

The new guidelines from the respected professional body says that knotweed should not affect the value of a home unless it is causing visible damage. The guidance, due out by the end of March, claims there’s now a better understanding of the threat level of the plant which means surveyors no longer have to flag it up as a risk, in most circumstances.

Experience has shown, according to the new guidance, that the invasive weed “rarely causes” substantial damage to homes, and is less of a risk than other species such as buddleia and bamboo*.

Surveyors are being asked to “flag-up” the presence of knotweed if it is visible within 10ft of a property and where there are signs of damage. They are advised to investigate to determine whether any damage is caused by the plant or something else, but in any case it is unlikely to affect mortgeability either way says the guidance.

“Substantial structures on sound foundations are unlikely to suffer structural damage due to Japanese knotweed.”

It has been estimated that knotweed, a plant that is difficult to kill and irradiate, grows up to 10ft, and has been costing the UK economy millions a year in treatment and in home devaluations.

The plant tends to lie dormant in winter months before resuming its rapid growth in the summer, while there is a danger of it reaching buildings and crossing neighbour boundaries, sometimes resulting in litigation between property owners.

A UK government report published last year gave credence to the view that Japanese Knotweed may not be as big a threat to buildings as previously thought. These were the conclusions reached in the government’s report and pointed to what the future might hold for Japanese Knotweed and those affected by it.

Previous to that, in May 2019 the House of Commons Science and Technology Committee published a report “Japanese Knotweed and the built environment”. This followed a detailed inquiry prompted by the publication of new research by Dr Mark Fennell, Professor Max Wade and Dr Bacon in July 2018 (Fennell et al) which suggested that Japanese Knotweed may pose no greater threat to property than that of other plants.

What is Japanese Knotweed?

It is a large, highly aggressive and invasive weed, sometimes referred to as “elephant ears, “donkey rhubarb” or “monkey weed”. It grows in a variety of conditions and can commonly be seen alongside train tracks, on river banks and on waste ground.

The plant has large hollow stems similar to bamboo and large, green, heart shaped leaves. Its roots (rhizomes) have been thought to grow as far as seven metres horizontally and two metres deep underground – it is this extensive root spread that makes the plant so difficult to remove once established.

The only means of destroying Japanese Knotweed is to kill the roots. This can only be achieved by either multiple applications of herbicide or full excavation. If even a few centimetres of root are left in the ground, the plant can regrow.

Japanese Knotweed is classed as a controlled plant under the Wildlife and Countryside Act 1981. Whilst is not illegal to have the plant on your own property, it is illegal to allow it to spread on to adjoining property, including allowing the roots to spread underground. Under the Environmental Protection Act 1990 the plant is classed as “controlled waste”, meaning that it is illegal to dig it up and remove it from your property unless it is disposed of at a licensed landfill site.

In a 2018 legal case, Network Rail Infrastructure Ltd v Williams and another involved Japanese Knotweed growing on a railway embankment owned by Network Rail, and the claimants owned affected bungalows.

The Court of Appeal made it clear that the presence of Japanese Knotweed will not, in itself, provide grounds for a diminution of value claim, but encroachment of the plant onto neighbouring land will probably entitle the neighbour to damages. This is not because of any reduction in value, but because it interferes with the ability to fully use and enjoy the land. It has yet to be seen how courts would approach the quantification of such loss.

*Mortgage lenders have some concern about Japanese knotweed and its impact on the built environment. But stories about knotweed have become a popular media favourite, often exaggerated. It can undoubtedly damage the built environment, but usually in buildings by exacerbating an existing weakness such as cracks, crumbling mortar, decaying tarmac etc. It can lift paving slabs, block paving, etc, but damage to building structures is rare.

Buddleia is in fact responsible for more structural damage than Japanese knotweed. Seeds can grow in the smallest of cracks, even without access to soil. It is particularly damaging to the railway network, where it weakens bridges, interferes with overhead power lines and obscures signals.

Bamboo roots are very strong and not easily broken. They are thin and fibrous and can be found to a depth of up to 1m. They can be destructive to the built environment lifting paving, distorting or penetrating soft or decaying tarmac. They can also find their way into a buildings if there is a point of access available, and can grow through retaining walls and spread beyond boundaries.

So in those respects these two plants can be worse than Japanese knotweed.

Japanese knotweed, not the nasty threat it once was?

The Menace that can Undermine your Investment