The House of Commons library has issued a briefing paper on its intentions for the private rented sector.

Titled “Building the new private rented sector: issues and prospects (England)” and published 12 June 2015, the briefing guide talks about building more private rented sector homes and looks at measures by Government and policy proposals from those within the sector to increase the supply of privately rented properties in England.

It’s easy to see the main thrust of Government thinking on the PRS through this report as more than three-quarters of it is taken up by the Government’s emphasised on “the importance of increasing institutional investment” into the PRS to fund large-scale, professionally managed developments.

In August 2012 the Montague review, a Review of the barriers to institutional investment in private rented homes, was published. The Government accepted a number of its recommendations, which were announced in its Housing Stimulus Package in September 2012. These included a £200m Build-to-Rent fund (later increased to £1bn), a £3.5bn PRS housing guarantee and the establishment of a PRS taskforce to attract investment and share information on best practice.

Institutional PRS investors have called for additional measures to increase the attractiveness of investing in the sector. These range from reducing the requirements to provide affordable housing requirements in planning obligations, improving access to and affordability of land and a stable regulatory framework within which to operate.

The Government thrust on encouraging institutions and developers into the PRS has met with some success but the report acknowledges that as the economy improves the attractiveness of build-to-sell is somewhat eclipsing the idea of build-to-let, especially in light of the fact that large scale management of private rentals in the UK is as yet no proven record of economic viability

On small-scale buy-to-let landlords the report has to say that, “Despite the Government’s focus on institutional investment, the majority of PRS properties in England are currently built, acquired and managed by individual, buy-to-let landlords. This note sets out the Government’s response to policy proposals from smaller landlords to help them boost the national supply of private rented housing, such as reform of Capital Gains Tax and Value Added Tax.

Some interesting facts from the report about the PRS for small-scale landlords include:

Growth of the PRS via institutional investment and professional management would solve many of the Government housing issues: a major new-build effort with large numbers involved, professional management with fewer legal issues and a general improvement in rental housing stock as small-scale landlords strive to compete. However, it’s doubtful this would drive out all those rogue landlords as they operate mainly in a sector of the market the institutions would not be interested in.

Still, the UK has a long way to go before institutional investment has any serious impact on the PRS and small-scale landlords as it does in other countries, as this chart from the report shows: 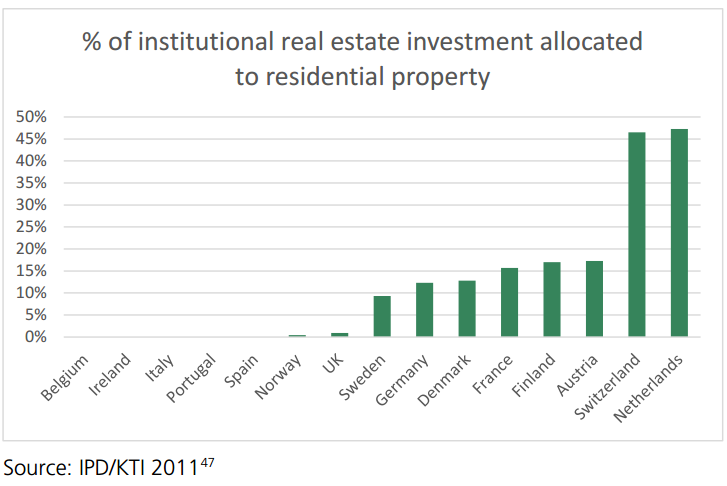