HMOs have often been a preferred option for many landlords wanting to maximise their returns, as packing more tenants into one property always gives a high yield. The problem has always been getting planning permission to convert larger properties, and sometimes commercial properties, into HMOs. There have also been fears that in some locations HMOs have been overdone and the market is becoming saturated with them.

Most addresses where reverse conversations are taking place are for a return to single family dwellings, a move which is obviously beneficial and more profitable for the owners, when the demand for houses is there. Generally, no planning permission is required for a change of use back to a single dwelling. In such cases, landlords would not be required to submit any application,” a council the spokesperson said.

Based upon this planning policy, in 2017 Waltham Forest Council did not grant any planning applications for HMOs that resulted in the loss of housing.

This is not the case though, particularly in some other parts of London. As a recent report from Inside Housing says, “Houses in multiple occupation are often far from ideal lodgings – but a trend to convert them to more profitable houses is leaving residents with few options.”

HMO living is often a compromise for tenants; they provide a less expensive option for those people who can’t afford a place of their own. The compromise paying lower rent for living in shared accommodation, and in London where rents are at their highest, and when people are not eligible for welfare assistance, this is often the only option for them.

These properties are predominantly owned by private landlords and a good proportion of them house social tenants, something that takes a large burden off the local authority. This type of housing is “far from perfect”, says Inside Housing, but it is obvious that local authorities will really struggle to find enough places for people to live.

Linda Wade, Liberal Democrat councillor for Earl’s Court, is on a mission to stop houses in multiple occupation (HMOs) in her ward being converted for other uses. She tells Inside Housing:

“Within my ward there are about eight of these types of applications in the pipeline. I’m faced with potentially 80 to 90 people at risk of being made homeless because of planning applications to convert HMOs into self-contained units. HMOs are not perfect but they do in some cases represent an affordable option for low-paid workers.”

There is a policy to try and protect HMOs in the borough, and private landlords need a licence to operate an HMO, but in practice these rentals are still being lost to the borough through conversations away from HMOs.

A Freedom of Information Act request to all the London boroughs, plus Newcastle, Birmingham and Bristol, by the publication found out just how common it now is for HMOs to be converted: 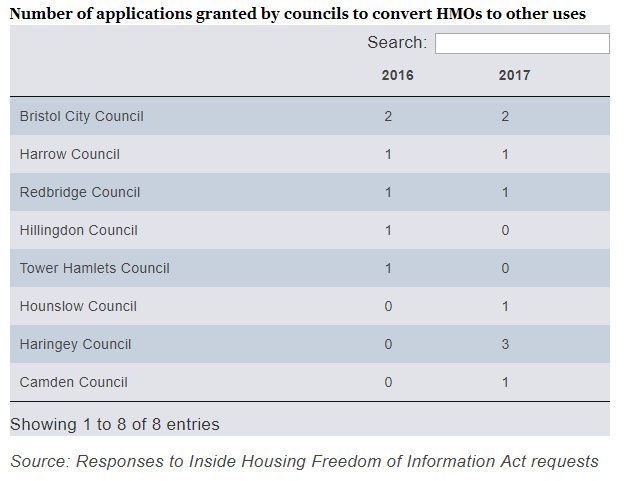 [Source: Responses to Inside Housing Freedom of Information Act requests]

Karen Buck, Labour MP for Westminster North, told said that some councils have planning policies to protect HMOs, but there was one case in 2016, when a former hostel in Bayswater, run by the housing association Viridian, closed, when “Sixteen occupants were left homeless. Westminster housing did try to assist with keeping the hostel open as it recognised there is a shortage of this type of accommodation. “Cities thrive when they offer a range of housing options suitable to the variety of needs of their populations,” said Ms Buck.

The Freedom of Information Act request showed that recent planning applications granted for works on HMOs in Westminster for 2017 did not result in any losses to housing. These works were simply to increase or reconfigure the units, the figures showed.

However, in some locations the loss of HMOs is putting existing tenants under a great deal of stress, with the constant threat of a move to lower cost areas, further away from their employment.

‘Lockdown has been a been a kick in the teeth’