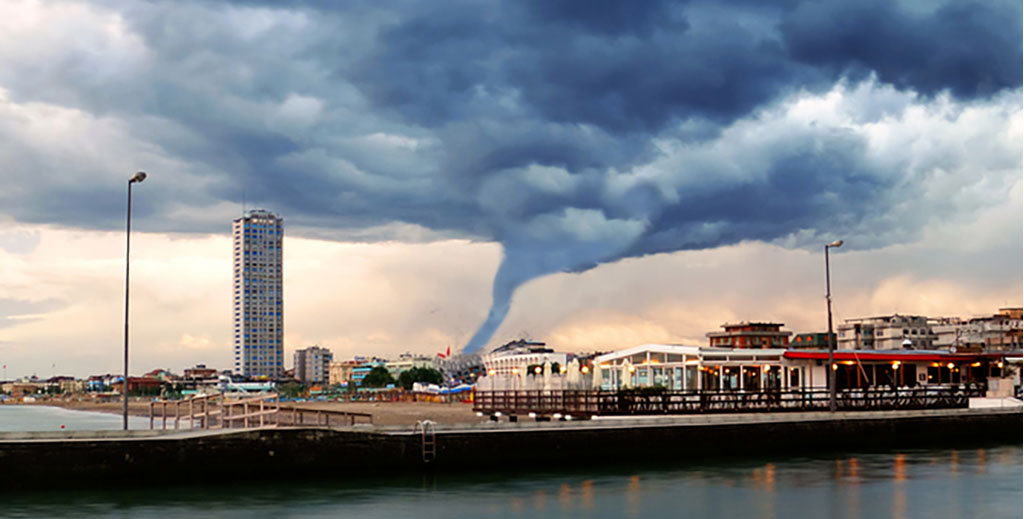 A freak weather event shocked residents and left extensive damage in its wake in Barking, East London and Essex, last week. Photos and video footage from the scene showed heavy black cloud circling in the sky and swirling winds amassed over the area.

Eyewitnesses described debris, rubbish and heavy objects such as fence posts flying through the air and swirling round and round. Footage shared on social media revealed collapsed garden walls, bricks scattered across driveways and fallen tree branches strewn across flooded roads littered with partially submerged cars.

Although it was over in just a few minutes, the ‘Barking tornado’ caused severe flash flooding in nearby Havering and Dagenham, damaging homes, roads, electrical equipment and vehicles.

Damage to property was particularly extensive, with many homes suffering damaged roofs and shattered windows.

How common are tornados in the UK?

According to the Met Office, although tornadoes in the UK are not on the large scale that you might find in the US, there are about 30 tornadoes on average recorded in the UK each year. They mostly occur during the summer and autumn. Most tornadoes, although they produce damaging winds, do not lead to widespread destruction.

Tornados originate during thunderstorms when winds rise from the surface, come together, and begin to rotate. The rapidly rotating column of air that reaches between the base of a storm cloud and the earth’s surface creates the famous circular twister image of the tornado. If the column does not reach the surface, it is classed as a funnel cloud.

The Met Office is investigating the ‘Barking tornado’ – Craig Snell, a forecaster at the Met Office, said that they couldn’t currently confirm or deny that there had been a tornado, but that “all the ingredients” for a tornado were present.

Met Office forecaster, Matthew Box, said “it is probably that a brief tornado did occur.”

Prior to this freak weather event, the nearest tornado to Barking happened in 2006 in West [IM1] London, and the year before a tornado in Birmingham caused quite a bit of damage to the local area.

Freak severe weather events are on the increase

Although tornados are rare in the UK, extreme weather events are increasing. A Met Office study has shown that an extended period of extreme winter rainfall in the UK, similar to that seen in winter 2013/14 (one of the wettest on record), is now about seven times more likely due to human-induced climate change.

Several indicators in the latest UK State of the Climate report show that the UK’s climate is becoming wetter. We all remember the month of May, which brought heavy downpours to much of the UK, with Wales seeing its wettest May since records began in 1862 and all countries of the UK experiencing rainfall well above the long-term averages for the month.

The UK Environment Agency has warned that we’re going to get more intense bouts of flooding and scientists predict that climate change is likely to lead to higher storm surges as sea levels rise. Over the past few years property owners across the UK have experienced some of the worst weather damage on record, with many suffering uninsured losses due to torrential rain, gale-force winds and flooding.

Preparation and maintenance more important than ever for landlords

A few weeks ago, LandlordZONE’s insurance partner, Hamilton Fraser Total Landlord Insurance, offered landlords advice on how to prepare for torrential downpours and strong winds in response to flood alerts and weather warnings. But this latest freak weather event highlights the need for landlords to be prepared at all times – despite major improvements in weather forecasting since the Great Storm of 1987, sometimes the forecasters are still caught out by the severity of extreme weather.

When the weather is unpredictable, as it has been over the last few weeks, a storm or severe rainfall can arrive with little warning. The best way to reduce the likelihood of damage to your property is through regular maintenance.

By routinely carrying out the steps below a couple of times a year, you will have the peace of mind that you’re doing all you can to reduce the likelihood of severe weather causing damage to your property.

Landlords are legally responsible for maintaining and repairing external structures, including drains, gutters and external pipes. So, make sure you clear gutters, downspouts and drains of debris that might cause a blockage and lead to leaks or overflow into the property.

It’s generally a good idea to inspect the roof before winter and assess it after to see whether there’s been any damage. Replace any loose, cracked or broken roof tiles or slates and don’t forget to also inspect the chimney for cracks or loose brickwork and make sure it’s fitted with a storm collar to prevent water leaking into the loft.

Tree maintenance is best carried out in winter when there are no leaves and it’s easier to locate any dying or loose branches that need removing. Cut back any low-hanging branches too, particularly if they overhang areas where people walk or are close to another property.

It’s particularly important to make sure fence panels are secure and free from rot, as they are usually excluded from insurance policies in the event of a storm, yet they are at risk of being lifted up by heavy winds and can cause extensive damage, for example smashing windows, due to their size and weight.

To reduce the likelihood of water damage, check that windows and doors are watertight and secure.

Damage cause by severe weather, be it a storm or a flood, can be very expensive to rectify. At Hamilton Fraser Total Landlord Insurance, the average claim for flash floods is £17,708, so it pays to be protected.

Steve Barnes, Associate Director at Hamilton Fraser Total Landlord Insurance, says, “With extreme weather events increasing steadily over recent years, it’s vital for landlords to not only do as much as possible to prevent flooding in the first place, but to ensure they’re properly covered too. Hamilton Fraser Total Landlord Insurance is signed up to the Flood Re scheme, which will cover buy to let properties as long as they meet the criteria outlined here. The scheme raises funds to cover flood risks in insurance policies and reimburses the insurer after a paid claim is made, helping to keep premiums down.”

Having comprehensive landlord insurance in place provides reassurance that you and your property are protected should the worst happen and you need to carry out expensive repairs. A comprehensive policy like Hamilton Fraser Total Landlord Insurance’s Premier policy will not only cover the cost of repair work, but also loss of rent or alternative accommodation.