Simple analysed data from over 100,000 policies to compile the data on the most common risks faced by landlords.

The most expensive claim in the top 10 is £25,000 to repair the damage caused by an electrical fire.

The findings are included in Simple Landlords Insurance Risk Report, published today (url: www.simplelandlordsinsurance.com/risk-report). The report includes practical tips to reduce the likelihood of having to make a claim.

Andrew Weston from Simple Landlords Insurance says: “We have released this research to show the practical measures landlords can take to avoid the hassle and time of making an insurance claim, all of which will help keep premiums low.

“Saving money will become even more important for landlords in coming years as tax increases announced by the Chancellor are phased in, which for many investors could make the difference between profit and loss.”

The report also explains how insurance premiums can vary significantly according to property type, location, and tenant type.

Andrew continues: “Buying insurance is often one of the last things buy-to-let investors consider. Having a clear understanding of the key factors that can influence your premium will save landlords money in the long run.”

The Risk Report warns landlords about damages that are not covered by insurance policies. The most common reason that a landlord did not have cover was that they hadn’t purchased accidental damage cover in their policy. 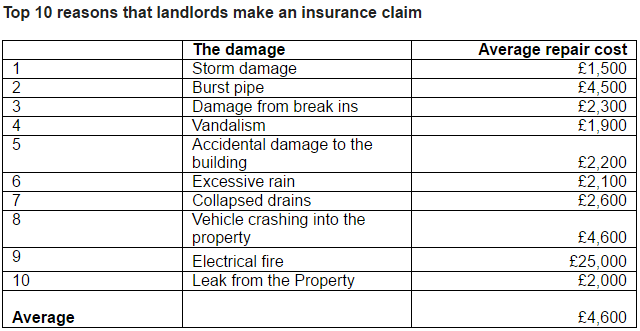 While you never know where a storm will hit, certain features can make properties particularly vulnerable to harsh weather conditions. Properties with conservatories attached and dormer windows are especially likely to be damaged by high winds and excessive rain during a storm.

A property in Edinburgh needed more than £11,000 worth of repairs, including Perspex roof covering to the buildings’ exterior and solid oak flooring to its interior, after two panels from its conservatory roof were ripped off during high winds in January 2015.

In Keighley, West Yorkshire, another landlord sustained damage worth just under £5,000 when their conservatory roof was replaced after every single roof pane was punctured by hailstones during a storm in July 2015.

A landlord in the West Midlands was contacted by his student tenants following a break in. The burglars smashed through the back door and tried to enter all the bedrooms upstairs. All the doors were locked but the thieves damaged the doors and frames, a damage bill of £4,931.52.

Simple Landlords Insurance is owned by Ryan Direct Group and has been trading since 2007.

Simple Landlords Insurance covers a wide range of tenant and property types, including those some insurance companies won’t insure.