18 stores a day shutting, but gap between openings and closures cut by almost 80% says PwC and Local Data Company

From a decline of more than 20 a day in the first six months of 2012, the rate of store closures stores has fallen slightly to 18 per day in the first half of 2013, according to PwC research compiled by the Local Data Company (LDC).

The study of 500 town centres across the UK showed that 3366 outlets closed in a six-month period compared to 3157 openings, a net reduction of 209 shops.

However, year on-year, the net reduction in the number of stores has plummeted from 953 closures in H1 2012, (a fall of 78%) because more shops are opening on the High Street alongside fewer closures. In H1 2012 2670 stores opened and 3623 stores closed.

Charity shops, cheque cashing, betting shops, convenience stores, hearing aid shops and coffee shops were among those opening the most branches, during the first half of 2013.

“The shifts in multiple retailers’ store portfolios are a barometer for changes in our society and its habits. Closures in areas such as the photography and video sectors reflect the sea-change in how consumers are spending – the well-publicised insolvencies at Jessops and Blockbuster are stark proof of that. Women’s clothing store reductions reflect the intense competition in this sector, with so many fascias on our high streets.

“Upticks in areas such as cheque cashing and pawnbrokers reflects a society where a sizeable part of the population is forced to turn to these types of borrowing for basic needs. More convenience shops have opened as multiple grocers seek ways to increase further their market share.”

The data also revealed that across multiple retailers in 500 town centres photographic shops, women’s clothing, video libraries, banks, recruitment agencies, shoe shops, furniture shops and travel agents have been amongst the hardest hit in the first half of 2013.

“This set of figures represents the continuing transformation of our traditional retailers and store estates as they respond to the changing behaviour of their digitally-enabled customers.

“The high street needs to transform itself to be relevant to the “new normal” shopping behaviour in the same way that retailers are being forced to – hopefully this data shows a step in the right direction.” 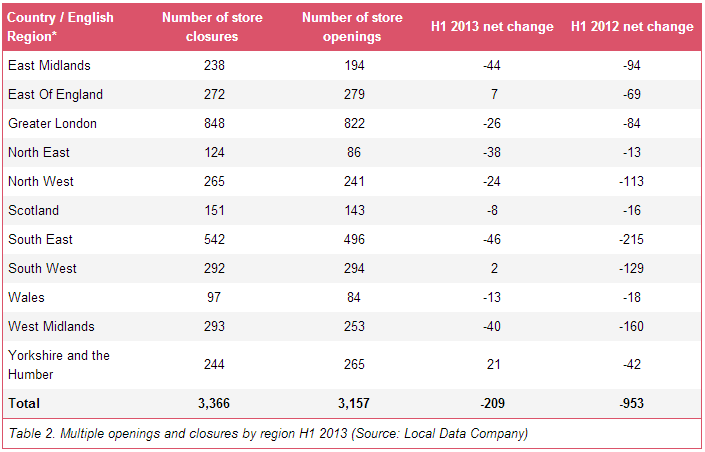 “This analysis of openings and closures in the top 500 town centres shows how significant the changes are to the make up of our high streets. The good news is that the significant decline in chain retailer numbers in town centres in 2012 is slowing down.

“That said, closer examination of the data shows the significant ongoing decline of traditional shops with food, beverage and entertainment taking their place. The pressure from online competitors, supermarkets and ‘out of town’ providers will only increase.”

About the Local Data Company

The analysis is derived from The Local Data Company visiting the top 500 town centres. Each premise was visited and its occupancy status recorded as occupied, vacant or demolished. Vacant units are those units, which did not posses a trading business at that location on the day we visited it. Internal shopping centre data is included where we have had co-operation from the landlord. The total number of multiples premises surveyed was 64,843.

The town centre is defined as per DCLG’s definition of the retail core. Scotland has no official retail core geography so the geography taken is the postal town area where not specified otherwise. Net change is openings less closures. The percentage change is derived from the net change figure relative to the total number of live multiple businesses.