London will be transformed from a city of home-owners to a city of home-renters in a single generation, that’s the prediction of a report published this month by accounting consultants Price Waterhouse Cooper (PwC).

PwC say patterns of home ownership in London are changing fundamentally. Whereas in 2000, almost 60% of Londoners owned their own home, either outright or with the help of a mortgage, and around 40% rented, from either private landlords or the social sector.

Now, PwC predict that by 2025 this could be reversed: 40% would own their own home, and around 60% will be renting, and this will be mostly from private landlords.

Previous research[i] from PwC had highlighted the rise of private renting across the UK, particularly amongst 20-39 year olds, often now referred to as “generation rent”, and their research predicted the continuation of the trend throughout the next decade.

Their latest market analysis builds on their previous findings by expanding this into the regions. Whilst the London figures, they say, are the most striking, there are other salient regional results[ii]

“This analysis shows that people are increasingly being locked out of owning a home in London, demonstrated by the sharp rise in private rental levels and sharp fall in home ownership.

“With around 60% of Londoners predicted to be renting by 2025 (40% private sector/20% social housing), policy will need to adapt. This could include encouraging a better quality of private rented accommodation including longer tenure periods, and more rental properties designed for families.

“Demand for housing in the UK has outstripped supply for more than two decades. Changing the outlook for generation rent will require us to build more houses than needed just to match population growth in order to make up the past shortfall between housing supply and growth in demand.” 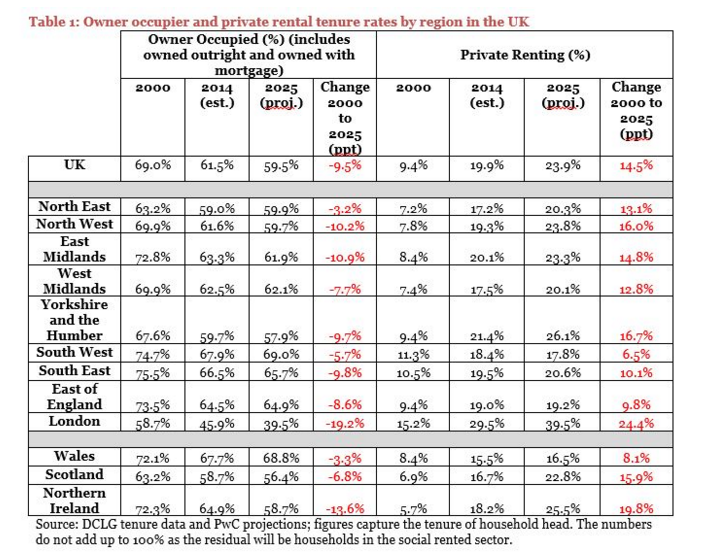 However, PwC acknowledge that forecasts are complicated by the unknown impact of the government-imposed tax restrictions on the buy-to-let sector. There have been reports that would-be landlords are piling into the market determined to complete purchases before the April 2016 stamp duty deadline.

But more data from the Council for Mortgage Lenders published last week show a decrease in gross buy-to-let lending in December. According to CML overall lending has remained healthy, with CML recording the highest number of quarterly loans to purchase homes for eight years.

Jonathan Harris, director of mortgage brokers Anderson Harris, has said that while the government’s measures could “deter more speculative investors, those landlords who are looking for long-term investments are unlikely to sell up en masse or desert the sector in droves”.

Even with less favourable tax treatment for buy-to-let purchases, with interest rates set to remain lower for longer and uncertainty on the equity markets, many investors are still looking to invest in property.

[i] Initial research on tenure was published in the PwC UK Economic Outlook report in July 2015 – this included projections at the aggregate level for the UK. Further research on tenure trends by age was distributed via press release in November 2015.

[ii] The PwC analysis identified key predictors of historical trends in private renting and home ownership across UK regions, including demographic trends, housing supply, historic mortgage volumes and loan-to-value ratios of mortgages. Projections of home ownership and private renting were then made based on assumption of how each of these factors would develop and vary between regions until 2025.