“Fundamentally…we believe that a strong UK economy will prove the solid bedrock from which the housing market can move forward. Improved employment and wage conditions, together with a more prosperous and secure outlook, will instil greater confidence in household finances.”

[blockquote align=’right’]“All agree that there is no silver bullet to the housing supply challenge. For that reason ideology must not get in the way of determined initiatives to support not only build for sale, but also affordable and private rented initiatives.”[/blockquote]

“Demand for rental accommodation has accelerated quickly over the past decade and there is little to suggest this trend will run out of steam anytime soon. With supply constraints possible in the medium-term, we believe there will be additional upward pressures on rents over the next five years”, the report says. 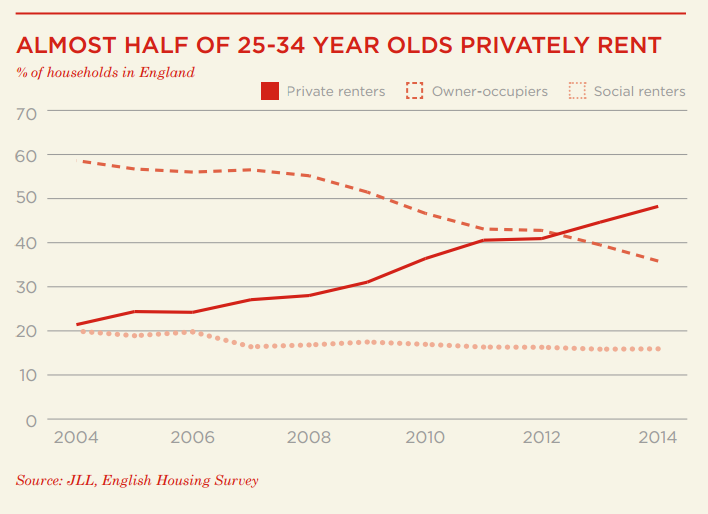 Extracts from the report say:

The UK’s private rented sector continues to expand. Figures from the latest English Housing Survey suggest that 4.4m of the 22.6m households in England, 19.4%, are privately rented.

Significantly, the number of rented households has escalated from just 2.3m, or 11% of all households, ten years ago. The situation is even more acute amongst younger age groups. It is astounding to think that almost half of all 25-34 year olds now privately rent in England. This has risen from just over 20% ten years ago (see chart).

Current trends also suggest that the number and proportion of private renters are set to rise further in the medium-term, despite political rhetoric in support of more owner-occupation.

Housing un-affordability and onerous deposits are the main drivers of this trend. Government initiatives such as 20% discounted starter homes offer some hope for would-be young home buyers, but this is unlikely to reverse, or even notably alter the strong upward march of the private rented sector.

Unsurprisingly, given both the high moving and buying costs in the owner occupier market and the greater number of renters, the most active part of the national housing market is households moving within the private rented sector.

Of the 2m or so household moves in England in 2013-14, as estimated by the English Housing Survey, around half were moves within the private rented sector. If households new to the sector are added in, 65% of all house moves were to private rented accommodation.

We are also expecting economic influences as well as demographic and social trends to lead to greater private rented demand over the next five years.

A strong and stable UK economy, including higher employment and salaries, is anticipated in the medium term, albeit with some international risks. These conditions will undoubtedly lead to greater demand for rental accommodation from young people starting work or wanting to move out of the parental home.

An increasingly pertinent point is whether there will be enough rental accommodation to house this considerable demand, especially given the recent tax relief changes for buy-to-let investors.

The vast majority of private rented properties across Britain are owned by private landlords, but many of these have been dealt a blow in the Chancellor’s budget in July 2015.

In an initiative that was aimed at levelling the playing field with owner occupiers, it was announced that higher rate mortgage tax relief on private rental income was going to be phased out by 2020.

As the vast majority of private landlords are higher rate tax payers, the impact could be significant, leading to a sizeable sell-off of properties, especially those which are highly geared and therefore most affected by this tax change.

However, it should also be noted that approximately 65% of rental properties are owned outright, rather than being reliant on a buy-to-let mortgage, meaning that the Budget changes make no difference to them.

All-in-all, there is unlikely to be any meaningful sell-off of private landlord rental property over the next few years, especially as we see both prices and rents rising steadily. However, there may be slightly less exuberant enthusiasm from new investors, which may have a longer-term impact on rental supply.