For the first time since the introduction of the new tenancy laws in Scotland there has been a marked increase in rents in the big Scottish cities, that’s the message from the latest Q1 2018 Citylets Rental Report.

The Scottish agency Citylets has been producing market reports since 2007. Released quarterly they are based on over 50,000 annual Scottish lettings recorded by Citylets.

These reports give an up-to-date and in-depth analysis of the “state of play” in the lettings market in Scotland, and are a useful guide for both landlords and agents, as well as providing vital information for those prospective tenants looking to rent.

After two quarters of declining rental growth, the Scottish PRS market has turned in Q1 2018, into a positive growth phase, with average rents rising 1.6% year on year (YOY) to stand at £780 per month says the report.

The results point to a decline in supply, while demand remains strong or is growing. Competition for the larger 4 bed properties in particular, the report highlights, in key urban markets, has resulted in sharp gains. Strong seasonal student demand has also been experienced, while at the same time there is evidence to suggest that supply is being further constrained.

It is perhaps too early to say what the true effect of the new legislation will have on the market, and the increasing popularity of short term holiday sites is likely to put further pressure on supply. However, the number of rental homes on the market in Scotland dropped in the first quarter of the year, while demand from people looking for property to rent increased, says the Citylets report.

“We believe we are seeing the first signs of a slowdown in the BTL market as tax changes from both Holyrood and Westminster begin to bite. The LBTT surcharge of 3%, which was designed to help first-time buyers by discouraging the competition of second home purchasers, does not appear to be having the desired effect. Recent research shows house purchase prices actually increased in 26 out of the 32 local authority areas. So whilst prices continue to increase it appears the supply of rented properties is falling.”

The new tenancy governed by the Private Housing (Tenancies) (Scotland) Act 2016 cam into force on December 1 last year (2017). According to the Scottish Government the new tenancy laws will “provide security, stability and predictability for tenants and appropriate safeguards for landlords, lenders and investors.” It will they say: 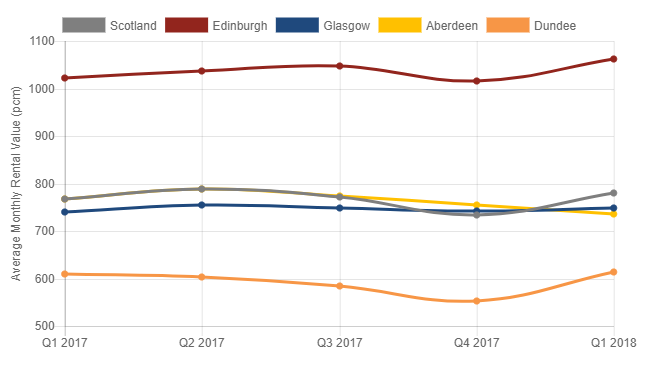