Home News Rents have fallen across most of Britain over the last 10 years.

According to the latest research from Hamptons International, real rents, i.e., adjusted for inflation, have fallen by -2.2% across Great Britain since October 2008. This means that the average cost of living has risen more than average rents over that same period.

The east of England (7.5%) and London (0.5%) are the only regions where rents have grown and have outpaced inflation over the last decade – all other regions have recorded a fall in real rents since October 2008 according the Hamilton’s October 2018 Rental Index.

Rental growth on new-let properties accelerated to 2.0% across Great Britain in October 2018, the highest level since February as every region recorded a rise in rents.

“Over the last 10 years inflation (CPI), which measures the average cost of goods and services (or the cost of living), has outpaced rents. As a result, real rental growth (rental growth adjusted for inflation), has fallen -2.2% in Great Britain since October 2008 (table 1). Over the last decade rents have risen 22%, but inflation has risen 24% over the same period.”

The East and London are the only regions across Great Britain where rental growth has outpaced inflation. In the East, real rents have risen 7.5% over the last 10 years. Meanwhile in London, real rents are up 0.5% since October 2008 (table 1). 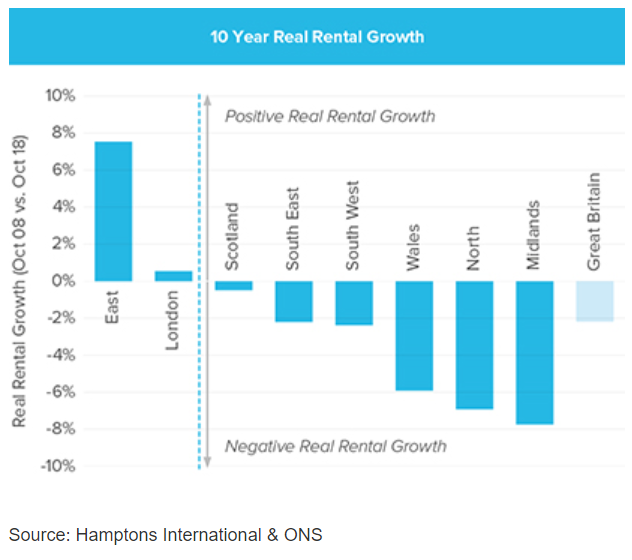 The average cost of a new let in Great Britain rose to £977 pcm in October as rental growth accelerated to 2.0%. Rental growth reached the highest level since February 2018 as every region recorded a rise in rents. The East of England saw the biggest increase in rents, up 3.9% year-on-year, while Scotland saw the slowest rental growth at 1.1%. Meanwhile rents in London grew for the second consecutive month, up 1.4% year-on-year.

“Real rents in Great Britain have been falling for the last 21 consecutive months. This comes as a result of sluggish rental growth and a post-EU referendum backdrop of rising inflation.

“However, this could be set to change as inflation begins to fade and rental growth starts to pick up pace. Currently the East and London are the only regions where real rents have risen over the last decade.

“Rental growth accelerated to 2.0% in October, the highest level since February. Every region recorded higher rents, with the East leading the way. Rental growth in London also picked up, driven by a 2.7% annual rise in Inner London rents.”