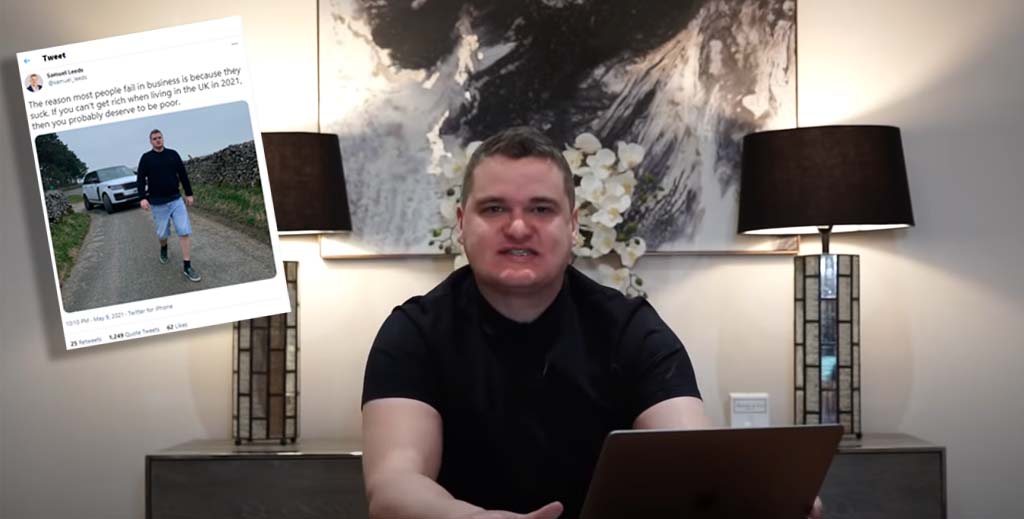 Property guru Samuel Leeds has managed to drum up the wrong kind of publicity again by using social ‘baiting’ techniques on Twitter.

Tweeting a photo of himself in front of a white Range Rover (pictured, above), he boasted: “The reason most people fail in business is because they suck. If you can’t get rich when living in the UK in 2021, then you probably deserve to be poor.”

This incurred plenty of mirth and wrath among hundreds of Twitter users and resulted in Leeds deleting his original tweet.

Some posted links to Danny Butcher, the former soldier who took his own life after getting into debt by spending thousands on a Property Investors training course.

Another of Leeds’ tweets sparked much hilarity among the online community. He posted: “When it’s 11pm and you’re still searching for that property deal,” showed him looking into the window of an estate agent.

One Twitter user joked: “You’re gonna love this website called Rightmove. You can even browse it while eating your kebab.” Another remarked: “Siri, how do I embarrassingly tell people every day that I’ve got money?”

Many of the tweets have taken aim at his clothes in the original tweet – baggy jumper and denim shorts. Said one: “Pipe down and stop raiding the local Scope bags.” And another posted: “Money can’t buy looks, personality or humility it seems.”

His last typically modest Tweet on the subject: “I dress like shit but still make more money than all of my haters put together,” was also roundly mocked.

One said: “To have to tweet this shows desperation. No expensive training courses being sold, a money pit of an investment up North, and renting an £8,000 a month Beaconsfield pile – house of cards is gonna collapse…”

Earlier this year, Leeds gained hundreds of critics by posting a video on TikTok where he extolled the virtues of ‘buying low, renting high’ in the north of England.