Home News Nothing will stop the growth in renting

Hamilton’s International researchers claim that recent policy changes by government will do nothing to stop the growth of renting.

Yes, landlords are buying fewer homes, taking out fewer mortgages, and landlords have sold 50,000 more rental properties than they bought, following the policy changes, but, say the researchers, there are many other routes into providing new lettings.

Figures obtained by Hamilton’s show that since the introduction of the 3% Stamp Duty Land Tax (SDLT) surcharge in April 2016, landlords have indeed sold 50,000 more homes than they bought. New purchases now make up a smaller part of the market, with landlord investors buying just 12.3% of new homes in 2017, down from 16.4% in 2015.

But despite landlords selling more homes than they bought, the private rented sector has continued to grow. Between April 2016 and 2017 the number of households renting had actually increased by 164,000, that’s 3% more than 2016.

This, say Hamilton’s researchers “is one reason why we forecast the sector to continue growing and reach six million households by 2025. By 2022, 20.5% of households will be renting in Great Britain, up from 19.4% today.”

This conundrum may come as a surprise to many when investor activity has fallen, but there are greater forces at play say Hamilton’s. “Higher demand for rental accommodation is being driven by longer term changes in demographics and the housing market, many of which aren’t unique to the UK. House prices consistently growing above incomes has meant we’ve seen a steady decline in home ownership and growth in demand for renting.”

Other Routes to Lettings

There is a tendency for a larger number of these homes to come onto the rental market when property sales slowdown, so buy-to-let mortgage applications can be misleading. In 2017, Hamilton’s estimates that 80,000 homeowners who attempted a sales ultimately decided to hold on to their property and put it on the rental market instead.

In other cases there are homes where couples, who are both home owners, decide to move in together, people relocate for work and rent out, or they keep an inherited property as an investment and then rent it out.

Hamilton’s say statistics from the ONS show that at least 200,000 homes change ownership through inheritance every year. Some of these homes are sold or used by heirs of course, but other research from UK Finance shows that around 16% of landlords acquired their property without a purchase, which includes inheritance.

Although still relatively small suppliers of rental property in terms of overall volume, and they target a specific sector or the market, namely higher priced rentals, new build and built-to-rent is becoming a significant provider. Particularly in the major UK cities, blocks of flats, purpose-built to rent, owned and operate by large institutional investors, like pension funds are springing up.

So, as well as those landlords buying for cash, perhaps also from on inheritance or a business sales, these other sources of rental property coming to market, not dependent on individual landlords taking out mortgages, explains how the sector can keep on expanding, despite some landlords selling up.

Hamiltons says there’s an incredible amount of wealth tied up in housing, with approximately 50% of total UK wealth tied up in landlord and property, according to The ONS. This, they think will continue to insulate it from change.

For 23 out of the last 25 years is seems, cash owners outnumbered those who need a mortgage. The same is true for Hamilton’s forecasts for the growth in the number of households renting from landlords. Most small-scale landlords have no debt on their rental property. 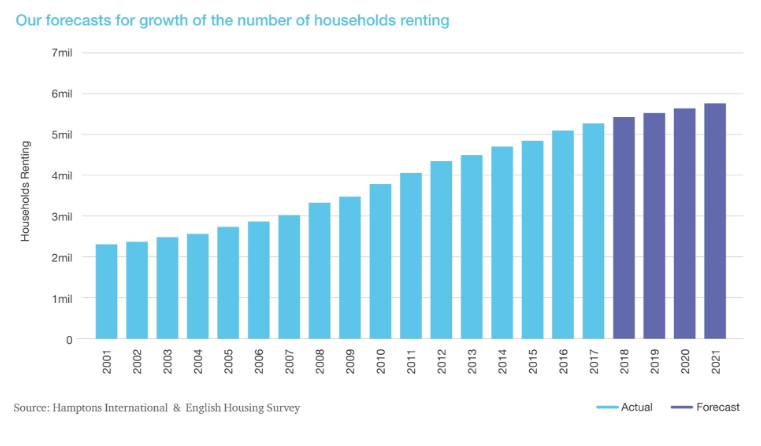 Around 65% of investor purchases were made with cash in 2017, that’s £21 billion worth of property according to the research. This sheer volume of cash has largely been built up through high house price inflation over a 25 year period. This mass of cash in the market, supported by increasing institutional interest, is insulating the rental market from the policy changes. Hamiltons International thinks this creates a firm foundation for the renting to continue to grow, particularly as the demand for rented homes will continue to rise.