According to the National Landlords Association (NLA) research*, one in three or 30 per cent of landlords polled are undecided about whether they will vote to leave or remain in the EU on Thursday – in the upcoming referendum.

London and the South East polled the greatest support for Remain at 45 per cent with the other extreme being the North East with 44 per cent intending to vote to Leave. 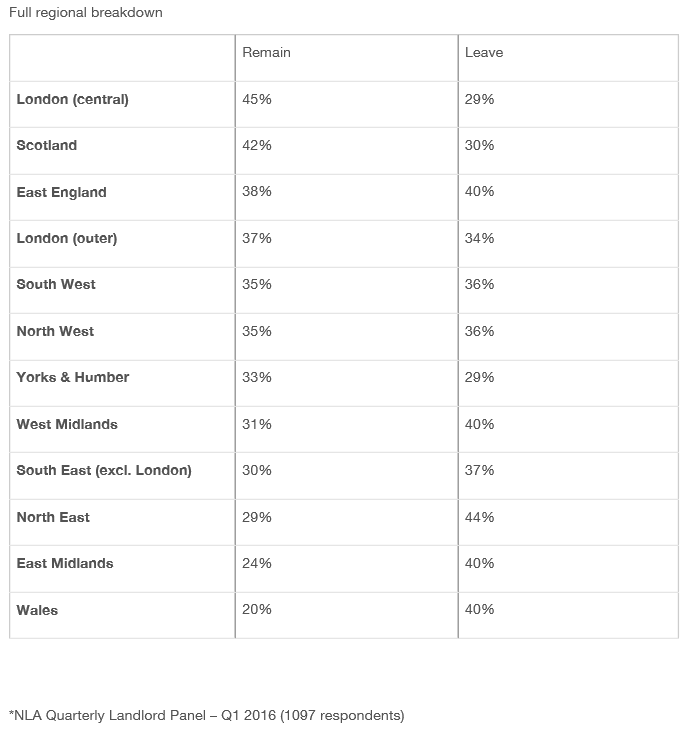 “Landlords, much like the rest of the British public, are divided on how they will vote in the EU referendum which means the decision looks to go down to the wire.

“The Remain and Leave campaigns have both had difficulty persuading the public on the benefits or hazards of a Brexit vote, and they have struggled to provide any clear analysis about the impact exiting the EU would have on the buy-to-let market.

“As a result, landlords appear more likely to vote in this referendum based on their attitudes to issues such as national security, trade, and immigration, rather than the effect on the UK property market or their businesses.”

The LandlordZONE® straw poll of around 500 respondents with its Website and Twitter polls combined gives a slightly different result overall with 55 per cent voting for Leave, 41 per cent for Remain and only 4% undecided. The difference here is that these respondents have volunteered to participate and have not been picked on at random as with the other polls.

Given that polls have been somewhat discredited since the last election, with their very misleading predilections, some point to betting trends as a more realistic means of predicting the outcome, where people are putting their “money where their mouth is”.

Currently the odds have shortened again on staying in, now 4 to one on for Remain. That means a £100 bet would net you £125 – your original stake plus a £25 win. Not a great outcome as a bet.

Alternatively, the odds for coming out are 3 to one against. That means a 100 bet would net you £400 – your £100 stake plus a £300 win, a much better proposition, but it would seem from this, less likely to happen?