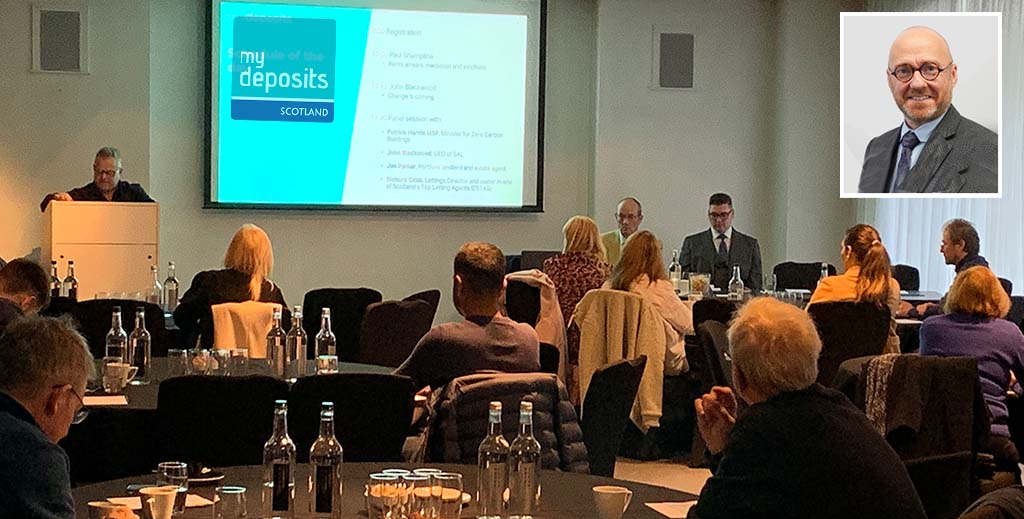 A new strategy for the private rented sector is to be published by the Scottish government before Christmas, its new housing minister Patrick Harvie has told a meeting of landlords convened in Glasgow by MyDeposits Scotland.

He made the comments during a panel debate about the expectation that ‘change is coming’ for landlords and letting agents in Scotland following a power-sharing deal signed between the Green Party and the SNP in August.

This saw Harvie, who is a Green MSP, given a newly-created title of Minister for Tenants’ Rights and the job of shaking up Scotland’s private and social rented sectors.

He told agents and landlords who attended the gathering today that the new strategy would focus initially on more ‘wellbeing’ changes for tenants such as the right to personalise homes and keep pets, before moving onto meatier matters around affordability.

Although he didn’t refer to it directly, this is widely expected to usher in rent controls that will cap rent rises in ‘pressure zones’ and be reviewed on a five-yearly basis.

Three months ago trade body Propertymark warned Harvie that his rent control proposals would be ‘catastrophic‘.

“We want to get to a position where the human right to adequate housing is met for everybody because it’s not being met now,” he said.

“Some of the questions around how we emerge from the pandemic and which measures should be kept for the longer term are the more high level questions that we are keen to consult on, particularly concerning affordability.”

Other measures that some landlords fear include some of the evictions restrictions introduce during the pandemic, particularly longer notice periods, as well as an annual ‘winter’ evictions ban, a measure that has already been retained to a degree in England.

Other speakers at the event include Paul Shamplina, who led the debates and spoke about evictions, as well as John Blackwood, CEO of the Scottish Landlords Association, portfolio landlord and estate agent Jim Parker and leading letting agent Richard Cook.

When the renting reforms are revealed next month, they will soon be followed the English government’s own much-lauded reforms of its rental sectors.