The top three Buy to Let (BTL) yields are in the North West according to HSBC Mortgages, with the City of Manchester providing the UK’s highest rental yield so far in 2015 at 7.93%.

The northern City reached the top BTL hotspot, up from second place in 2014, with London yields producing some of the lowest BTL yields in the country.

Buy to Let investors have been looking north where prices have generally been lower and consequently producing higher initial returns. HSBC identifies Manchester, Kingston upon Hull and Blackpool as the three cities with the best rental returns.

According to the international bank, Manchester had only a small increase in average house prices (up from £104,244 in 2014 to £108,870) but economic progress in the region has maintained a strong demand for rental accommodation by tenants.

Annual rents in Manchester, the bank says, have risen 4% from £8,316 in 2014 to £8,628. Also, the North West as a whole, and Manchester City in particular, has one of the biggest student populations in Europe. HSBC claims that more than a quarter of housing stock is privately rented (26.85%), making it the largest rental proportion of all UK locations.

Kingston upon Hull and Blackpool have climbed to the top of the list due to their low property values on average and a continuing strong demand for rented accommodation in these areas.

Typically, house prices in Hull would be around £69,135 with Blackpool slightly higher at £79,654, both regions requiring the lowest initial buy to let investment needed of all locations researched in the HSBC study. The study which included the 50 UK towns and cities with the most privately rental housing stock. 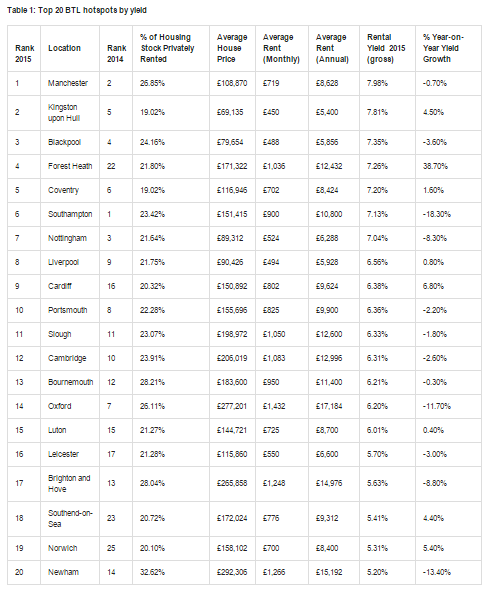 Commenting on the importance of location, house prices and rental demand when investing in a BTL property, Tracie Pearce, head of mortgages at HSBC, commented:

“Our research shows buy-to-let remains an attractive option for investors, but it’s important they focus on locations where rents have outpaced house prices. This means not just looking at large towns and cities, but also commuter areas and those with high rental demand and concentrated employment such as a hospital or university nearby. Almost a third of areas in our report have seen a year-on-year growth in yield and almost half of the areas have achieved yields above 5%.”

“Buy-to-let is a big investment and shouldn’t be taken lightly; but with the right research landlords can feel confident that they can achieve good returns around the UK.”

Newham is the top BTL hotspot in London, with a rental yield of 5.20%. However, there has been a continuing decline in rental yields in the capital as house prices have risen without corresponding rent increases. Newham, Brent and Lewisham have sown a more than 10 per cent decline in yield growth.

Six of the ten worst BTL Hotspots are in London: yields are as low as 2.87 per cent in Kensington and Chelsea where average house prices now exceed £1million and rent rises have been relatively static.