Average rents have risen from 1.8% in 2016 to 2.4% in 2017 and in that time London has gone from having the slowest rate of rental growth in England to the fastest, that’s according to the latest Countrywide plc Monthly Lettings Index.

However, the proportion of homes bought by landlords has dropped to 12.5%, a nine year low and the number of homes on the rental market in 2017 was 4% lower than in 2016

The figures are meeting the expectations of experts’ predictions in the industry: that tax measures introduced over the last couple of years are forcing landlords to seriously consider the size of their investment portfolios, and some are selling properties off, leading to reduced supply and higher rents.

In what appears to be good news for London landlords, in 2017 rents in London rose 3.2%, reversing the 0.8% fall recorded in 2016.  Scotland (3.3%) was the only other region in Great Britain where rental growth outstripped London.  Yorkshire and Humber replace Wales as the sixth most expensive region of Great Britain to rent a home in 2017.

The number of rentals bought by Landlords in 2017 was 12.5% of the owner homes sold in Great Britain, this figure is down from 14.7% in 2016, 16.3% in 2015.  It represents a nine year low with London seeing the biggest fall but otherwise all regions are affected. It equates to 5,400 fewer homes being available for rent in the capital city. 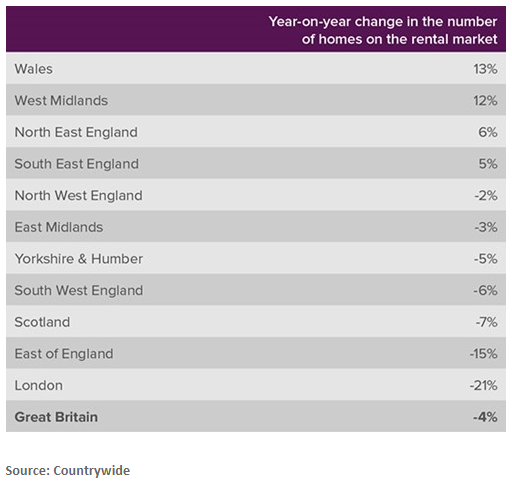 “Last year saw the rate of rental growth pick up to get closer to its long-term average.  Most of the rise comes from a pickup in rental growth in London, after falls in 2016.  Rents rose across every region of Great Britain last year, although the north of England saw rents rise at a slower rate than they did in 2016.

“Rental growth has been supported by a fall in the number of homes on the rental market, with the biggest fall in London.  It looks like increased competition between tenants for rental homes will drive faster rental growth in 2018.”