Foxtons, the eponymous London-based estate agent known for its aggressive sales tactics and fleet of branded green Minis, has benefited from London’s soaring property prices with a big increase in profit for the first half of 2014 – but its shares initially fell more than 10% as it warned that sales growth would slow.

The company, whose share price is becoming something of a barometer for the London residential property market, has issued the warning that recently introduced government policy initiatives aimed at controlling mortgage lending, coupled with the coming prospect of increases in interest rates, is having an effect on buyer demand and could cool the London market in the short-term. 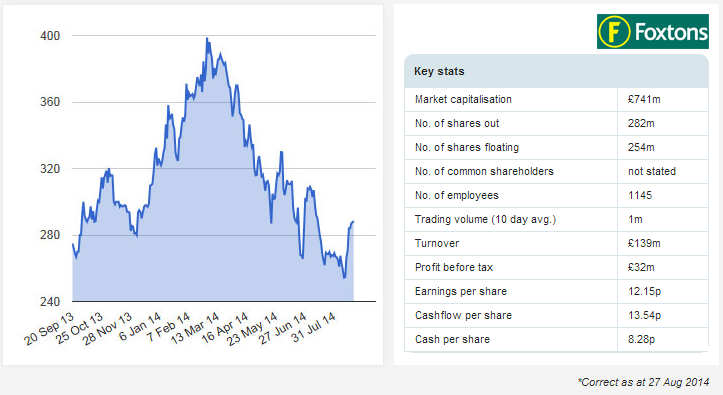 Nick Budden, Foxton’s chief executive, along with several other influential players in the industry, has said that he expects the policy change to lower sales and property prices in London in the second half of 2014.

The company with 49 branches across London, and which was floated on the stock market only last September, has returned a stellar set of first half figures in its financial report, with earnings at £24.9m, and an improved profit margin at 34%.

But the firm, it seems, doubts it can repeat the performance in the second half, with, at it sees it, a cooling off of the London residential property market.

The Bank of England, which now has full responsibility for the control of mortgage lending, in a recent Mortgage Market Review (MMR), has introduced strict afford-ability tests on all mortgage borrowers to avoid another housing bubble.

Lenders must now ensure no more than 15 per cent of new mortgages are approved for people borrowing more than 4.5 times their income and lenders will also need to “stress test” borrowers’ ability to repay loans assuming their mortgage rate were 3 per cent higher than the rate at the time the loan is approved.

Foxton’s success could cool with a slow down of the London resi market as mortgage rule changes take their toll…http://t.co/Rh3jwypL0a