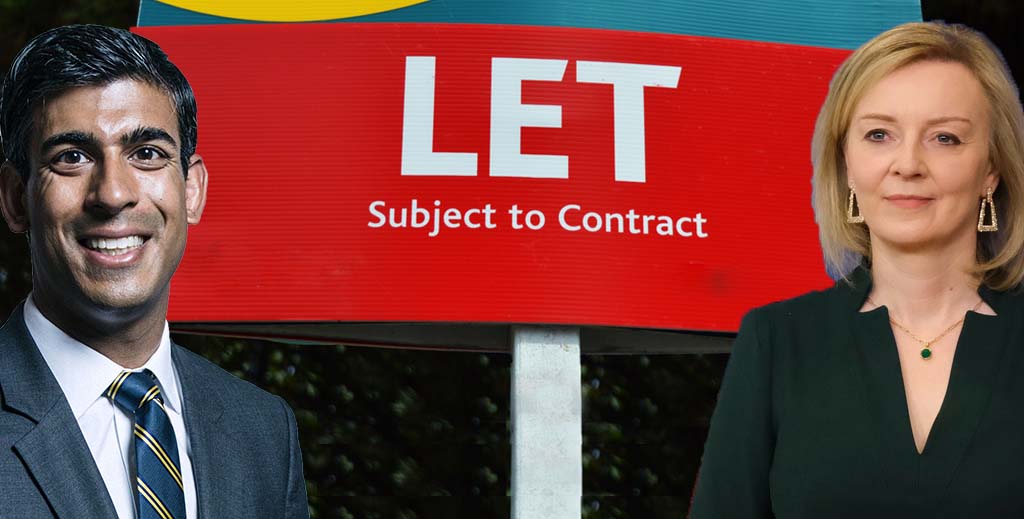 Liz Truss and Rishi Sunak continue to battle it out to become Prime Minster, but what will this mean for housing?

Sunak and Truss have talked about homeownership and with the challenges that many face getting onto the housing ladder, but have remain tight-lipped about detailed policies as regards the private rented sector (PRS).

Both candidates have sidestepped the issue of the growing supply crisis in the PRS, which comes at a time when the cost of living is increasing across the board. However, they need to grasp the nettle, if the party’s homeownership ambitions are to become a reality.

So what do we know so far?

Rishi Sunak has stressed the importance of supporting people in social housing into homeownership.

Whether this focus on owner-occupation will be at the expense of the private rented sector, in terms of policy decisions is unclear, but it is a concern.

In terms of housing in general Sunak wants a renewed focus on developing brownfield sites and stopping the practice of land banking.

In terms of taxation, Sunak has not called for immediate tax cuts, arguing that it would drive inflation up and it is simply not affordable at the current time.

He has also made a big play of the need to improve the energy efficiency of the housing stock. He has hinted that he will prioritise insulation for low-income households over new technologies such as heat pumps.

Liz Truss has been more forthcoming when it comes to the PRS. She plans to revive with proposals to enable PRS tenants to record their rent with credit reference agencies to help them improve their credit score, something which could help them when it comes to buying their own home.

This move would also provide landlords and agents by providing evidence that prospective tenants have a history of paying rent in full and on time. The NRLA believes this to be a good idea.

She has also gone on record saying she wants to make ‘buying and renting property cheaper and easier for people’, going on to say she is ‘concerned’ about the levels of regulation faced by landlords. She is also against rent controls, which she said would result in fewer properties being available to rent.

Elsewhere she has called for the development of low planning zones: new investment zones with clearer planning rules and less ‘red tape’ allowing developers get on with building straight away in a bid to generate jobs and opportunities and wants to abolish centralised housing targets.

Tax cuts are central to her campaign, however her favoured economist, Patrick Minford, has said that interest rates will have to rise as high as 7% to allow tax cuts, something that would have a huge impact on landlords with interest only mortgages.

What does this mean for the rental reform agenda?

The message on the ground, at the Ministerial meetings we have attended is ‘business as usual’.

Consultation on the Government’s White Paper ‘A Fairer Private Rented Sector’ continues at pace, and with rental reform a Conservative manifesto promise, while there could be delays, it is not likely to go away.

The NRLA is currently conducting what we want to be the biggest ever landlord and letting agent survey on the proposals. Well over 2,000 landlords have already taken the survey, with the responses to be used as the basis for our submission to Government in response to the White Paper and continued lobbying work. You can access the survey here and, if you are an agent, please complete and share with your clients.

What is the NRLA doing?

In addition to the survey we have written to the two leadership candidates’ campaigns teams, stressing the next Prime Minister must address the supply crisis in the private rented sector as a matter of urgency.

The figures are stark. Data shows 23 per cent of landlords are going to sell off homes in the next 12 months.

This is forcing up rents in the midst of a cost-of-living crisis and has seen waiting lists for council houses grow. Increased rents mean it will take tenants much longer to save for a deposit for a home of their own, something both candidates have flagged as an issue.

In our written briefing we have stressed this is a direct result of the restrictions on mortgage interest relief for landlords and the stamp duty levy on additional homes.

Since this began to be implemented in 2017 the number of private rented homes in England has fallen by over a quarter of a million and we are calling on whichever candidate is ultimately successful to end this hostility to landlords and take steps to encourage investment to meet the rising demand.

Removing the stamp duty levy alone would see almost 900,000 new private rented homes made available across the UK over the next ten years. This would lead to a £10 billion boost to government revenue through increased tax receipts according to analysts, Capital Economics

At the NRLA we believe a change of administration is the perfect chance for a new start, a change of attitude from the top down, recognising the value of private landlords in providing vital homes to let and generating much needed income for the Treasury.

We will continue to lobby on these issues and question candidates on their housing policies ahead of the vote, which closes on September 2.

Ben Beadle is Chief Executive of the NRLA.