A 42 year-old insurance underwriter who stumbled into buy-to-let some 20 years ago, while renting out properties he was unable to sell when re-locating for different jobs, says that he now needs a new strategy to make buy-to-let pay.

Since the Chancellor’s tax changes announced in his Summer Budget last July, and again in his Autumn Statement, shook the buy-to-let community rigid; a blow from which it has yet to recover when assessing the true damage the changes will bring.

The tax changes, due to come into force from April, on a sliding scale which will last over the next four years, have the potential to make a massive change to the profitability of UK buy-to-let, unless there is some sort of u-turn by the Treasury.

Landlords need to take a long, hard look at their investment portfolios, particularly those with substantially large portfolios and high net borrowing. The new rules for buy-to-let mortgage tax relief mean that landlords could be paying tax on the equivalent of up to 80 per cent of the interest on their mortgage payments from 2020. In addition, the stamp duty increase means paying a 3 per cent premium on second homes worth more than £40,000.

Economists are predicting it’s not just landlords who will suffer. As well as affecting second home owners, even when they sell their own home, the changes will ripple-out to affect the economy. Tenants could suffer most in the form of rental housing shortages, higher rents, and possibly poorer conditions as landlord find they don’t have the cash returns necessary to invest in repairs and improvements.

Rents could soar as higher tax bills are passed down to the tenants, and the economy will slow down as free movement of labour is restricted, and house prices could also suffer if the market is flooded with offloaded buy-to-lets.

The doom and gloom scenario for landlords is very worrying with recent estimates that up to half-a-million properties could be sold in the next five years when landlords turn their backs on buy-to-let. But although this may the case for a one sector  of the market (large portfolio landlords), there are others for whom the buy-to-let tax changes will have relatively little effect.

Recent figures showed that in 7 out of 10 British buy-to-let towns, average landlord profits of £3,400 per year would turn to losses of more than £300 if mortgage rates increased by 2.5 percentage points by the end of the decade.

The combined effect of an interest rate rise with the removal of mortgage interest tax relief would mean for many that they would be left in debt by the end of the tax year. Some private landlords will undoubtedly change their buy-to-let strategy.

But those who have bought properties in areas with a more affordable housing market will still see a a good return on their investment.

Andy Wynne-Jones the a 42 year-old insurance underwriter who stumbled into buy-to-let some 20 years ago while renting out properties he was unable to sell when re-locating for different jobs is perhaps one of the winners.

Andy now owns four buy-to-lets – one in his native Sutton, south-east London, two others in Gainsborough, Lincolnshire and one near his present home in Lincoln.

Simple Landlords Insurance asked Andy, a higher-rate taxpayer, to calculate what the rental profits would be from his three-bedroom townhouse in Gainsborough in 2020 when higher-rate paying landlords will be allowed only a 20 per cent tax rebate on their mortgage interest instead of deducting the whole cost, with the presumption that by then he could be paying a 5.5 per cent interest rate. 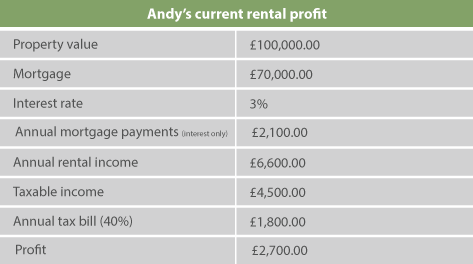 Andy’s projected rental profit in 2020 under the new tax regime: 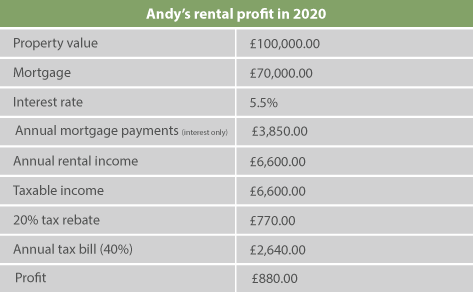 ​The table shows how the combination of increased mortgage costs and deducting mortgage interest payments at just 20 per cent leaves Andy with 67 per cent less annual profit – at £880 in 2020.

“It’s an alternative to a pension.  Essentially, when I get to retirement age I will look to sell two of the properties to clear the mortgage on the other two, then use the rent as an income.

“The mortgage interest tax relief cut combined with an interest rate rise of 2.5 percentage points would be felt in the pocket for the foreseeable future.

“And while this would be a blow it does not affect my ultimate plan, which is to sell my properties with capital appreciation and pay down the debt on my remaining buy-to-lets.”

As April and the inception date of George Osborne’s stamp duty hike and tax relief cut loom ever closer it looks increasingly less likely that the Conservatives will back-down over what most landlords would call their ill-conceived housing policies.

It is undoubtedly the case that many landlords will be re-evaluating the objectives of their buy-to-let investment. If they plan to stay in the private-rented sector (PRS), what had started out as a regular income boost as well as the prospect of capital growth, may now need an emphasis on the latter for a long-term pension plan.