A recent report published by Rightmove shows that rents across the nation, but excluding London, rose by just 0.7% in 2017.

Cumulatively, over the last three years, the Rightmove figures show that rents have increased, on average across the country, by 7.6%. With that rate of increase equating to over £50 per month for the average renter, and with wage increases largely stagnating, a slower pace of increase is hardly surprising.

On the other hand, the good news for London landlords is that new rental properties coming to market in London are seeing rising rents again, the first increase in the annual rate of growth since the start of 2016.

This uplift in London comes after a market readjusting following an unsustainable annual rise of 8% recorded in 2014. The subsequent fall in London is put down largely to stamp duty increases on high end properties and a surge in rental supply in 2016 from landlords rushing to buy-up properties ahead of the 3% stamp duty surcharge on second homes, after April 2016.

The overall regional trend is masking some of the key commuter areas in the South East that continue to perform strongly, with Farnham in Surrey coming top for rental price growth in 2017, up 9% on 2016.

“Nationally rents have been holding pretty steady over 2017, retaining the 3% plus rises seen in both 2015 and 2016, and adding a more modest 0.7% in the last twelve months. Increasingly stretched tenant affordability, and the surge of buy-to-let property supply beating the stamp duty tax hike deadline, have acted together to mute landlord pricing power.

“In contrast, after a few years of falling rents in London they’re back on the up again, due to a combination of tightening stock available to rent and strong demand.

“While the 2017/2018 tax year will see the start of the government’s changes to tax relief on buy-to-let mortgages, we don’t think this first phase will have that much of an effect on many landlords’ portfolio decisions until another year down the line.

“From speaking to some landlords they’re unlikely to make any decisions to sell up until they see in real-time how much of an impact it has on their finances, with many choosing to take a wait and see view rather than looking at short-term gains or losses.

“However, agents report that there are some highly-geared landlords with large loans looking to reduce their exposure to loss of tax relief by cashing in and selling some properties.” 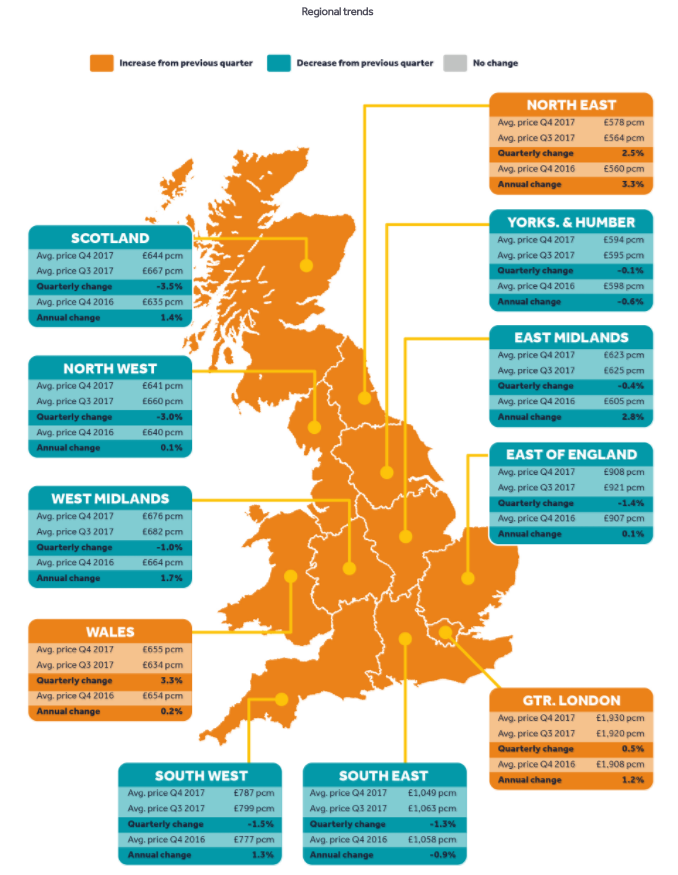