Government ministers are looking at new measures which would force all housing benefit claimants to contribute something towards their rent.

Many tenants currently claiming housing benefit get paid the full amount of their rent but the Chancellor has to save £12bn from the welfare bill and housing benefit is likely to be a key target.

According to a BBC report, George Osborne will next week promise to cut Britain’s housing benefit bill, a bill for the government which has more than doubled since 1996 to £24.2bn.

It is also being speculated that the cap on benefits may be more swinging than originally thought, with the benefits ceiling per household now at £26,000 being lowered to £20,000 and not the £23,000 as originally announced.

Although the government has refused to comment on the speculation about next Wednesday’s Budget, it is thought the move on housing benefit and benefit caps will form a key plank in the chancellor’s attempts to find £12bn of welfare savings.

George Osborne and Iain Duncan Smith, the welfare secretary, have restated their determination to achieve their £12bn target and their commitment to tackle “the damaging culture of welfare dependency”. 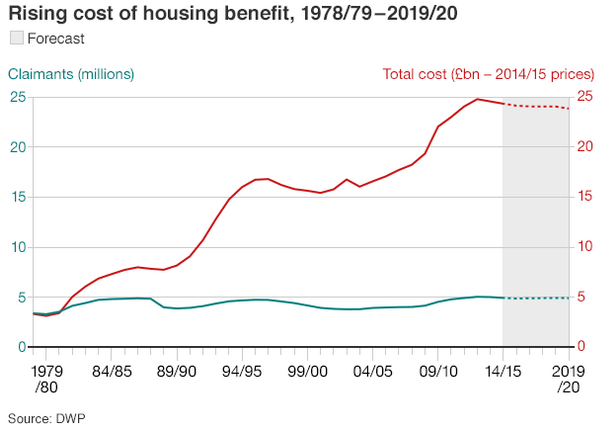 Some buy-to-let landlords will undoubtedly face difficulties over this as the government’s benefit cuts threaten rental income in the most expensive parts of the country. Large parts of London and the south coast in particular will be hit hard by the £23,000 or even £20,000 per year cap on benefit payments, which the government is now committed to introducing in this session of parliament.

According to the FT one in every four English private sector tenants is now claiming housing benefit, a rise of nearly 90 per cent in the past six years.

There are areas that are still affordable for low income London commuters but a high proportion need the housing benefit to survive in these expensive locations.  It is estimated that the housing benefits now being paid to private landlords is £9.3bn, 38 per cent of the total bill, the balance paid to social landlords.

Housing associations are also likely to be hit hard by the measures as they receive roughly half their income form housing benefit.

Moodys, the credit rating agency, has said that the proposed cuts risk cutting off the source of new private investment into the housing sector, a source which has helped grow it by some £60bn and helped stave off a more severe housing crisis.

All Housing Benefit Tenants to Pay "some" Rent – http://t.co/eV9nxifaPa