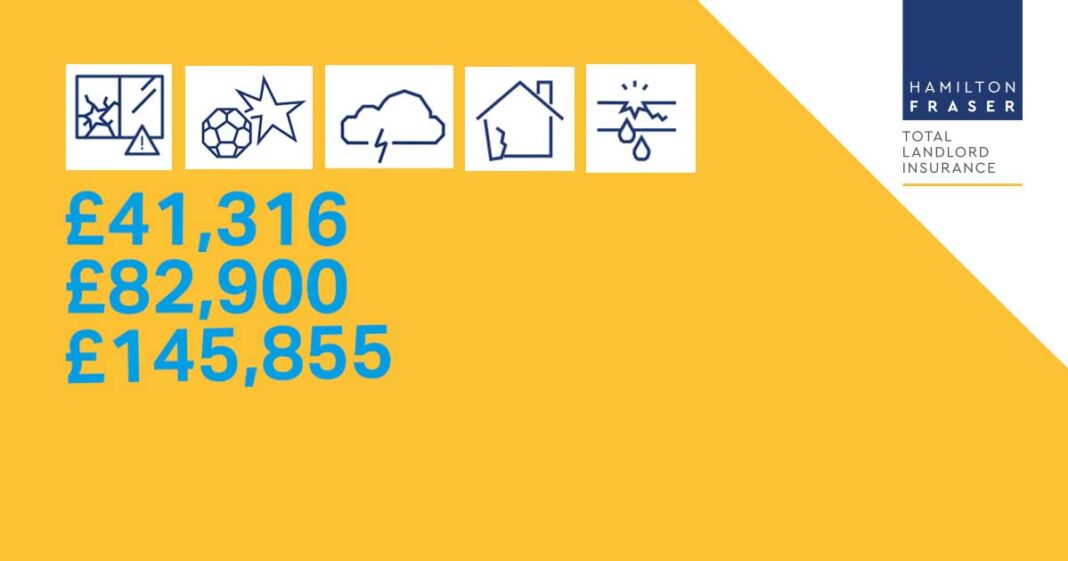 This means they’re covered in the event of damage to their property and for loss of rental income or alternative accommodation. But for the 15 per cent who don’t, it could have serious financial implications.

Having tenants living in a property is considered a higher risk than an owner-occupied property, so if you make a claim without having an appropriate insurance policy, it is likely to be rejected.

You also need specialist landlord insurance that will provide cover for rental-specific events such as theft or vandalism by guests of tenants or tenants themselves.

But what are the top five biggest risks landlords are likely to face when it comes to their rental properties?

Hamilton Fraser Total Landlord Insurance has analysed data from over 3,000 claims over the last five years to offer some useful insights and help landlords prepare for the worst.#

When it comes to the most common claims for landlord insurance, there is one claim type that consistently takes the top spot. Accounting for one in three of Hamilton Fraser Total Landlord Insurance’s claims and with an average payout of £3,057, ‘escape of water’ refers to water damage caused by things like leaking pipes or water tanks, baths, sinks or toilets or a leaking dishwasher or washing machine. Insurers in the UK pay out £1.8 million for this type of claim every single day.

This isn’t surprising when you think about the damage a burst pipe can cause – the highest claim ever paid out by Hamilton Fraser Total Landlord Insurance was for £145,855 after a slow leak underneath a bath rotted most of the flooring in a building. But although it’s the most common type of claim, there are some simple preventative measures landlords can take to avoid this.

Regular maintenance is key, particularly during the winter when pipes are more likely to freeze and burst or your heating system is more likely to develop a leak. Be sure to carry out regular inspections, including checking for leaks, insulate pipes and get the boiler serviced every 12 months.

It’s also a good idea to set your thermostat to 12/13 °C day and night between November and April when the property is unoccupied. Above all, make sure that your tenants know they should contact you as soon as they spot any damage or leaks. Find out more about how to prevent burst pipes in your rental property.

In second place are storm claims. Although these account for less than half the amount of claims than escape of water, at 12.5 per cent of all claims, they are on the increase as severe weather events and named storms become more common – almost doubling over the last five years. While the average payout over the last five years is £2,428, the highest ever was for £77,000 in 2020, when a flash flood submerged the ground floor of a house and the tenants had to be rescued from a first floor window!

During the past five years 64 per cent of storm damage claims have been for roof damage, so be sure to include an external inspection on visits to the property, paying particular attention to any loose roof tiles as well as gutters, downpipes, trees and fences. Find out more about protecting your rental property against storms.

Coming in at number three are claims for accidental damage. This could be anything from your tenant banging a nail into a water pipe to a child kicking a ball through a window. It’s the landlord’s responsibility to pay for the repairs to the building even if the accidental damage was caused by the tenants. While accidents can and do happen, vetting your tenants thoroughly and carrying out regular maintenance and inspections for your tenants’ safety and your own peace of mind should help minimise accidental damage and ensure you don’t invalidate any required claim on your policy if needed.

The highest claim paid out by Hamilton Fraser Total Landlord Insurance for accidental damage in the last five years was for £41,316 for repairs and loss of rent, when a drain on the street owned by the waterboard collapsed, causing dirty water to seep into the insured property through the kitchen and bathroom sinks. Another considerable claim was for £27,694 when the water tank in the loft failed due to age and stress, causing the water tank to collapse through the ceiling, spilling its contents throughout the property. These cases highlight the importance of making sure the property is well maintained, but also that accidents sometimes happen that are beyond a landlord’s control.

The fourth most common claim over the last five years at Hamilton Fraser Total Landlord Insurance has been for break in – when somebody attempts to enter or forces entry into a building illegally. There are obviously quite a few things landlords can do to deter people from breaking in, for example installing a burglar alarm, motion sensors, deadbolts and locks. But it’s also up to the tenant to make sure the property is secure.

The highest claim for break in ever paid out by Hamilton Fraser Total Landlord Insurance was in 2018, for £80,438, after the perpetrators ripped copper piping and radiators from the walls and smashed up the bathroom to access pipes, causing severe water damage. Make sure your property is secure by following the advice in Hamilton Fraser’s ultimate guide to securing your rental property.

Claims for subsidence – the downward movement of the ground beneath the property which can make the foundations unstable – have crept into the top five since 2017. But while they only accounted for 6.5 per cent of all Hamilton Fraser Total Landlord Insurance’s claims over the last five years, subsidence claims have the second highest average payout, coming in at a substantial £6,922, and with one ongoing claim for subsidence in 2017 resulting in a payout of £82,900.

With subsidence on the rise due to climate change, it’s important for landlords and tenants to be on the lookout for the warning signs, especially after the summer months. Identification and treatment of subsidence sooner rather than later is critical to stop the issue from escalating. Find out more about how to spot subsidence and what to do if you have it.

The high-value claims that don’t make the top 5

Although fire claims don’t make the top five when it comes to the proportion of claims paid out by Hamilton Fraser Total Landlord Insurance, fire claims are top of the list for average payouts, coming in at a hefty £22,558. Fortunately, only four per cent of claims over the last five years were for fire. But it’s worth knowing that, according to Firemark, people who live in rented or shared accommodation are seven times more likely to experience a fire.

While domestic fires have been steadily decreasing, almost half of fires reported in 2019 – 2020 were caused by faulty appliances or misuse of equipment. In one case, a bed was left leaning against the wall too close to a wall light, setting fire to the bed.

The tenants tried to pull the mattress through the house to get it out of the property, but despite their best intentions, this caused damage throughout the property on all floors, resulting in an eye-watering payout of £241,676 – the highest single claim Hamilton Fraser Total Landlord Insurance has paid out in the last five years.

Tenant education is clearly key when it comes to any risk that may result in a claim, and fire is no exception. However, it’s up to the landlord to carry out regular portable appliance testing, to make sure all gas fittings are well maintained and in good condition and that annual safety checks are carried out by a Gas Safe registered tradesperson. You can find more detailed guidance in the guide, How to reduce the likelihood of fire in your rental property.

That way you won’t be out of pocket if you have the misfortune of a tenant or their guests damaging your property on purpose. Claims for malicious damage can run into tens of thousands – Hamilton Fraser Total Landlord Insurance paid out £44,289 when tenants created a cannabis factory in a property, overriding the electrics and installing sprinklers, causing water damage throughout. Malicious damage is included in Hamilton Fraser Total Landlord Insurance’s Premier policy as standard.

Forewarned is forearmed when it comes to understanding the risks associated with renting out a property. The best way to reduce the risks is to make sure you carry out thorough tenant referencing, do regular inspections and maintenance, and establish a good working relationship with your tenants. Dealing with things early on, paying particular attention to the most common risks such as burst pipes, can help you avoid minor issues escalating into bigger problems that are going to eat into your profits.

But no matter how well prepared you are, it’s important to have the best landlord insurance cover for you in place to provide comprehensive cover that meets your needs.