In part one of this UK housing market valuation and forecast, I looked at the latest house price to earnings ratio in the context of historic norms (here’s a link to part one).

My conclusion was that the UK housing market appears to be at the “expensive” end of its valuation spectrum, with the house price to earnings ratio at 5.16, some 29% above its long-term average of 4 (where the average house price today is £196,067 and average earnings are £37,962).

At the end of the article I mentioned that the house price to earnings ratio had been based on the earnings of the average home buyer rather than the average UK employee (including those who cannot afford to buy).

I wanted to re-do the housing market valuation and forecast using the broader UK average earnings figure as I thought it would produce a more accurate measure of how expensive the market really was.

However, now that I’ve looked at the data a second time, that doesn’t appear to be the case (largely because I miss-read some of the data first time around).

Instead, whether house prices are compared to home buyer earnings or average UK earnings, both ratios seem to be saying the same thing, to almost exactly the same degree:

The UK housing market is expensive on a price to earnings basis.

On that basis, the average house price today is currently 28% more expensive than its historic average, relative to earnings.

That is essentially the same as the 29% “overvaluation” conclusion I came to in the previous housing valuation article.

Another way of looking at this is to say that, with UK average earnings at £25,537, the average UK house would cost £153,222 if it were valued at the historically average multiple of 6-times earnings.

That means house prices today could be “overvalued” by as much as £42,845 on average.

The “fan chart” below is the same as the one in the previous article, but this time based on an average valuation of 6-times UK average earnings, rather than 4-times home buyer earnings. 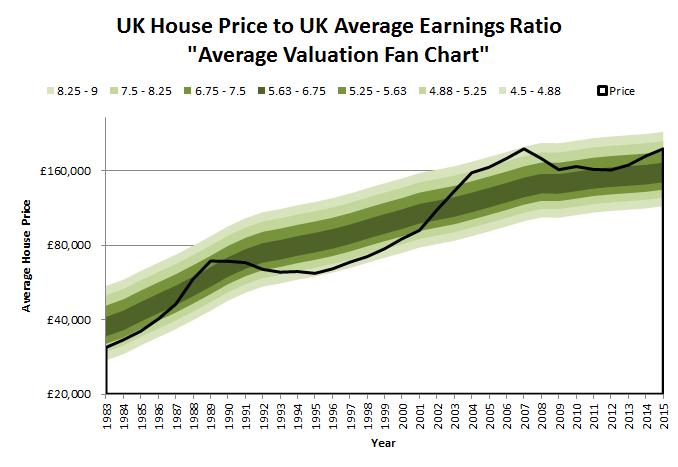 A quick explanation of the fan chart:

The valuation “bands” in the fan chart cover the same range as before, i.e. from 25% below to 50% above the historic average, which in this case means house price to earnings ratios from 4.5 to 9 (where the average value is 6).

As you would probably expect, with the market on a high price to earnings ratio, the current price is towards the top end of the historically normal range of values.

I usually give each of those valuation bands a descriptive name and currently the average UK house price (at £196k) falls into the “expensive” band, as you can see in the table below.

If we assume that house prices will return to the historically average multiple of earnings at some point, we can then make some reasonable statements about future house prices.

If, for example, house prices returned to their historically average multiple of earnings tomorrow, we would see the average house price fall to £153,222 from its current £196,067.

Obviously that’s unlikely to happen overnight. What is more likely is that the return to average multiples will take several years at least (and some kind of change in the economy as well, such as rising interest rates).

If valuations took 10 years to return to normal, and if average UK earnings grew at 3% a year, we would see:

So in my opinion it is entirely reasonable to say that there is a good chance we could see virtually no increase in the UK average house price in the next 10 years.

If you think that’s impossible then remember that, according to the Halifax House Price Index, we have already had no increases at the UK average level since 2007, some 8 years ago.

Contrary to popular opinion, house prices do not always go up and future returns are closely related to current valuations.

You only have to look at the difference in returns between 1995-2005 (168% gain, going from low to high valuations) and 2005-2015 (18% gain, staying at high valuations throughout) to see how important current valuations are to future returns.

I will leave you with my “heat map” which uses the same data as the fan chart, but which highlights how future returns are likely to be affected by high or low starting valuations: 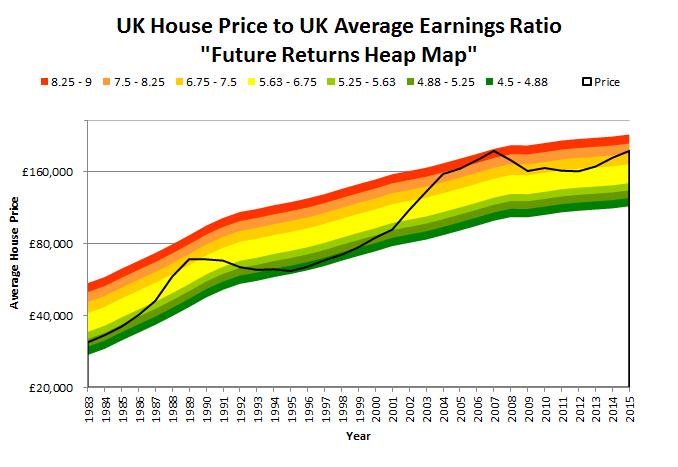 Of course there is a lot of regional variation in all this, most obviously between the south east and the rest of the country, although that is perhaps an analysis for another day.