Does the economic mess in France have any lessons for us in the UK? With the Labour opposition threatening to go down the same road, is it not rather worrying that landlords may find themselves facing a similar ruinous situation post the next election?

In France, François Hollande, who came to power two years ago, has reformed his government for the second time in less than six months amid disagreements and resignations within his socialist party over economic policy.

[blockquote align=’right’]Is it not rather surprising then that our Labour opposition party’s policies appear to have a lot of similarities to Hollandes failures?[/blockquote]

Coming to power with a high tax and spend policy, in stark contrast to our coalition’s policy of spending cutbacks, the Hollande Government is facing an economy that has stagnated, as many predicted it would, when he pledged to bring in punitive taxation on the wealthy, and to retain the unsustainably high levels of social provision, employment protection and the early pensions traditionally enjoyed by the French people.

Following crushing election results in the spring, Mr Hollande’s response has been a semi policy reversal. He is now proposing to ditch some of his former punitive taxes in favour of a more pro-business approach, with less public spending and the unwinding of some of the highly complex regulations he has already brought in. But far from gaining resigned approval he has struggled to get his package through parliament and now faces open rebellion at his proposed cuts and changes by his own socialist party.

Hollande’s woes are perhaps best illustrated by the steep fall in housing starts this year. With the combination of high taxes, new laws regulating the housing market, and increasing tenancy protection rules, it’s perhaps not so surprising that all this has exacerbated the French housing shortage and prolonged the construction recession.

According to the Financial Times (FT) the need for action in the French housing sector is urgent as it accounts for 8 per cent of national output, employing almost 1.2m people. After recovering somewhat after the financial crisis, since Hollande’s measures started to bite annual housing starts have collapsed and are now almost 50% below his pledged target figure of 500,000 a year. 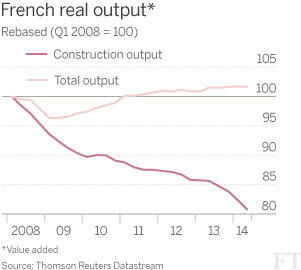 The FFB (The French Building Federation) has said that many smaller building companies are now going out of business and job cuts are likely to accelerate. The French government’s problems however are not limited to rising double-digit unemployment; there is widespread public concern over France’s escalating housing shortage.

Is it not rather surprising then that our Labour opposition party’s policies appear to have a lot of similarities to Hollandes failures, far too many it would seem: namely, increasing public spending, price controls and more regulation, and a tightening of the tenancy protection laws to include rent protection, removal of the s21 process and bringing in longer-term (3-year) tenancies?

To give a flavour of the consequences of the French tenancy laws and in particular their long-term tenancies, this is a posting from an expat website:

“…rented their house out through an agency on a 3 year contract. They have been the tenants from hell, breaking sinks, removing bathrooms, selling the owners property that has been stored in the garage, and of course, not paying the rent until taken to court. They were in arrears and they were taken to court and ordered to pay the outstanding, which they did so they could not be evicted. They then stopped paying again and are in arrears.

The 3 years was up on the 30th July….6 months’ notice in writing and by recorded delivery was sent to comply with the law. On the 30th July they asked for 15 days extra and it was agreed. The 15 days was up on Monday and they are still there. A Hussier was employed to deliver the 6 months’ notice as well as the letter and he has said that he needs to go to court to get an order to get them out…

…If he goes to court the first date available is 24th September and of course with notice and slow workings of everything here [in France] it will be October and they will be in for the winter!

If you are thinking of renting your property out [in France] full time…..DON’T….the French that abuse the system (and boy do they abuse it) ruin it for the honest renters and it is not worth the heartache…..rent out as a Gite [holiday let] to get some income or just lock it up until you sell or retire out permanently!”

So, Mr Milliband, do you really want to bring us to this?

Do you really think that a few thousand votes from tenants is worth the fallout of landlords leaving the private rental market like they were deserting a sinking ship; of exacerbating a housing situation that is already calling out for more supply, more building, more affordable homes and more affordable rental accommodation?

Will these same tenants thank you when rents rise even further? When landlords begin to realise in their droves that the headaches of renting out property, with rents controlled by the state, and the risk of being stuck for months or years with delinquent tenants, is just not worth the candle?