Excessive intervention in the buy-to-let sector could dampen activity more than policymakers intend.

The buy-to-let sector has been the subject of several surprise announcements in the past year. It seems that before the dust from one shake-up even begins to settle, policymakers announce another.

The most recent comes from the Prudential Regulation Authority (PRA), the branch of the Bank of England responsible for supervising insurers and lenders. On 29 March, it published the outcome of its three-month review into buy-to-let underwriting standards.

The PRA is concerned about lapsing standards

In recent years, buy-to-let lending has grown significantly faster than owner-occupier lending. Lending firms show appetite to expand further into the market, and the PRA believes that they may relax standards to achieve this.

It has proposed a set of regulatory measures that will apply to transactions not already regulated by the Financial Conduct Authority (FCA). The measures include stricter affordability assessments and interest rate stress-tests. They also include rules for lending to landlords who already own portfolios of four or more properties.

The proposals are sweeping, and could make it harder for many borrowers to secure buy-to-let finance.

‘Systemic risk’ in the mortgage sector

In its latest Financial Stability Report, the Bank of England identified that landlords are more vulnerable to interest rate movements than homeowners: 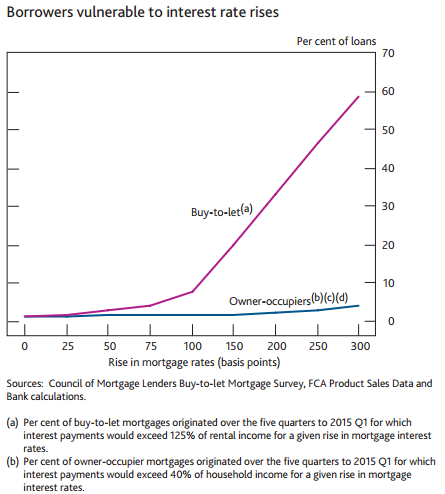 The Bank fears that a big enough jump in interest rates could prompt many landlords to cash in their investments. It claims that around 15% would consider selling their properties if their rental income ceased to cover their interest repayments. This could, in turn, intensify a drop in property prices.

The Bank’s vigilance is commendable, even if its concerns are perhaps excessive. According to the Council of Mortgage Lenders, only a third of privately rented properties are subject to a buy-to-let mortgage. A 300 basis point increase would affect two-thirds of loans. With 15% of landlords selling, we can assume that even this worst-case scenario would affect only 2.7% of properties.

Indeed, government intervention appears to create a far bigger risk of a mass sell-off than even a large jump in finance costs.

Even so, we should endorse and encourage responsible lending. Any growth in the buy-to-let sector should be sustainable, and lenders should work with regulators to achieve this.

But the PRA measures could do more harm than good

The buy-to-let sector is diverse. To once again cite CML findings, approximately 75% of buy-to-let borrowers own just one rental property, whilst 2% own ten or more. Different lenders take different approaches depending on their appetite for exposure and risk.

Therein lies the first concern: that a holistic regulatory approach is inappropriate for such a diverse market.

The second is the sheer amount of tinkering currently going on in the sector. The hike to stamp duty rates for second and subsequent properties is only just taking effect. In just 12 months, the phased withdrawal of buy-to-let interest relief will begin. We don’t yet know what effect these measures will have. They may cool the market, and mute lenders’ growth plans, without the need for further intervention.

The rental sector is an important part of the UK housing market. Discouraging rental investment won’t fix the supply problem that’s at the core of the housing crisis, and may in fact cause more damage than regulators intend.